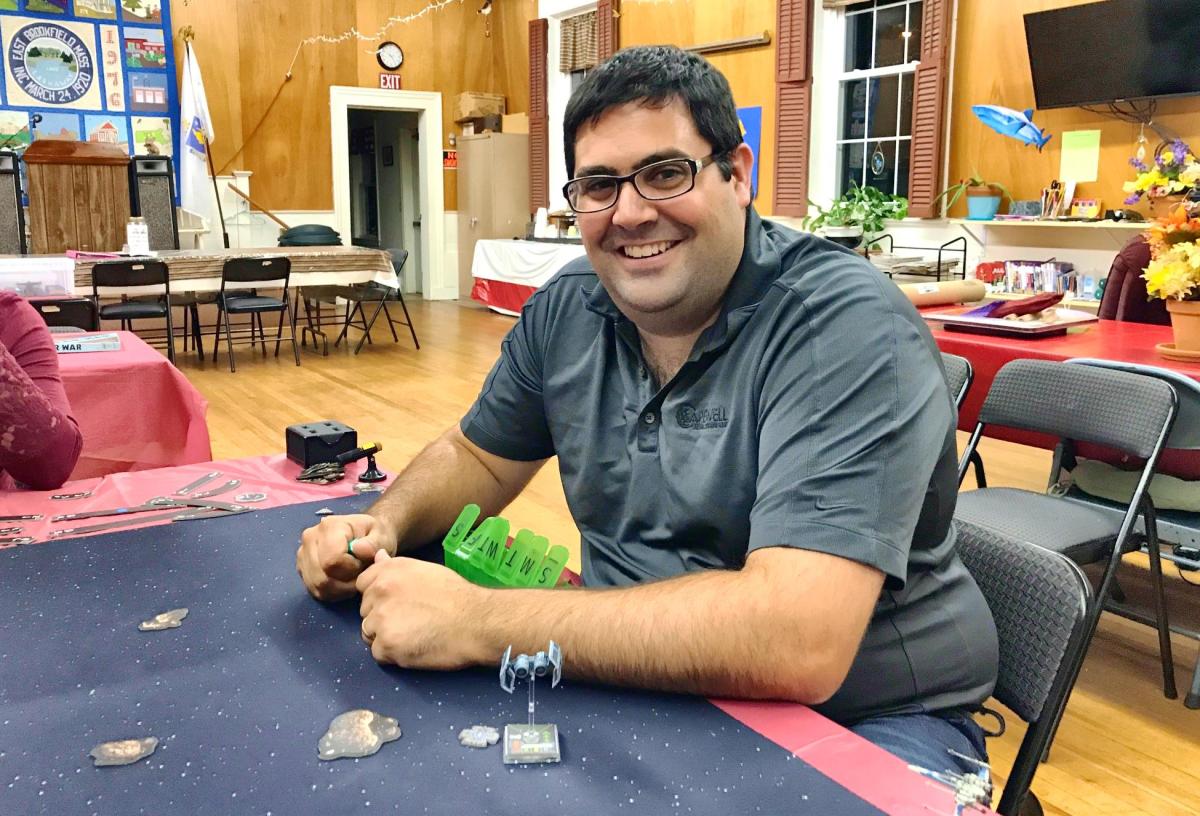 Last Thursday Night we had our monthly gaming night for the Mass Pikemen Gaming Club.  Turnout was light but we were able to have a couple of games.  We had a brief card game from 1983 – Flying Buffalo’s “Nuclear War” in honor of our nights game master Jared Burns.  Why?  Well the game has a B-70 Bomber card which was a semi-prototype of the B-1, which Jared served on in the US Air Force.

The second game was an X-Wing demo game run by Jared.

Our next gaming night is September 28th at the East Brookfield Senior Center hall.  We should have a sci-fi skirmish game (retro sci-fi) and more.  The pics below tell the tale of the night – overall my daughter Ellen Morin was the night’s big winner!

It was a fun night!

It’s been a bit busier on the gaming front.  Jared Burns (USAFA ’04) and I (USMA ’84) got together last Sunday afternoon in preparation for the launch of the Mass Pikemen Gaming Club .  We play-tested Combat Patrol™ with Star Rovers figures that I have previously posted about in this blog, as well as an X-Wing game.
The scenario was one where the Frinx and some Aphids were protecting RT22 in a bunker behind an old factory.  The Star Ducks, led by Duck Vader, were attacking to seize RT22, using their jet packs to quickly assault through the open ground which the Frinx had covered with anti-tank weapons.  I gave the Star Ducks 3 chances in the game to use their jet packs at 3 movement cards per try – and that worked well rules-wise.
Highlights of the battle!  There was a grenade-throwing fest in the center (one of my grenades scattered back into me adding to my losses) between one Star Duck team and a green Aphid team.  This resulted in multiple casualties, especially when one of my Aphid’s grenade attacks rebounded from a rock, but the Star Ducks had the better of that fight.
I gave Duck Vader the ability to deflect incoming direct fire, but I got lucky.  Duck Vader was in the open at short range and got lit up by two Frinx bazookas and the Frinx platoon sergeant with an automatic grenade launcher.  End even though I gave him a 5 endurance, his goose (or rather duck) was cooked with about 7 wounds.  His demise  then caused the entire Star Duck force to lose heart, effectively ending the game.
We then played X-Wing, and it was time for the USAF guy to beat (really thrash) the Army guy…ironic…he was the Empire so the day evened out.  It was a good playtest for our first game night on July 27th.  Jared did a nice job in teaching me the game – and then avenging the previous game.  He was the Empire, and I was the Rebels with two ships each.
I really liked the game and the ease at which I learned the basics.  Thanks to Jared for a great day!