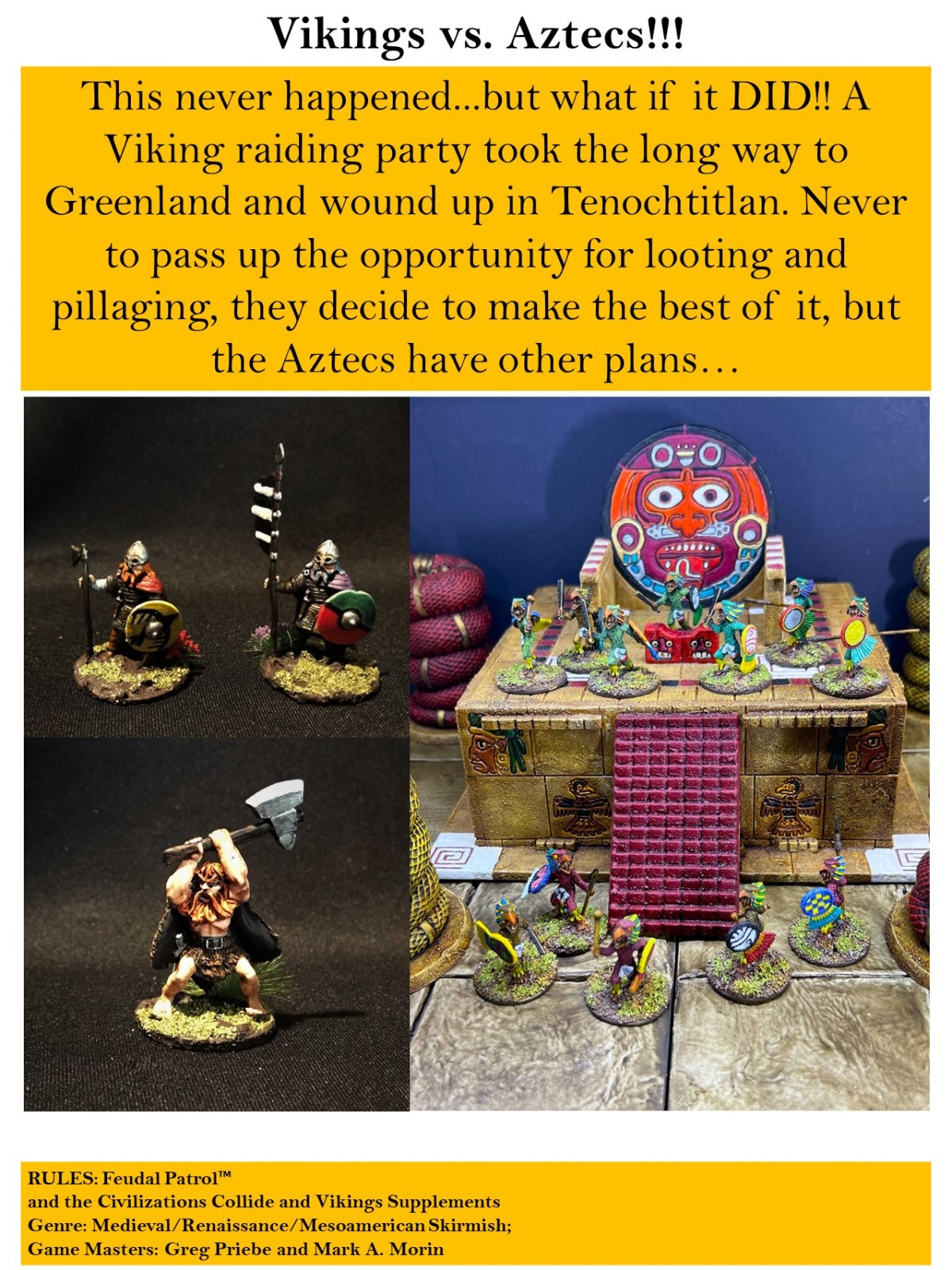 I will be running 4 Feudal Patrol™ games at the HMGS Fall In® gaming convention next week in Lancaster, PA. In 2022, I have been running Aztec/Mesoamerica/Spanish Conquest themed games at multiple gaming conventions – and they all have been well-received. I am really looking forward to running these games at Fall In® in the H.A.W.K.’s room – and I hope to see some of you there.

So, you ask, what are you running Mark, and when? Well, I aim to please – so let me answer that!

Friday, November 4th from 9 AM to 1 PM, Paradise Room

I will be running my “Raid to Satisfy Huitzilopochtli”. It’s a pre-Spanish Conquest fight between the Aztecs and their neighbors the Tlaxcalans. The Aztecs attempt to conduct a raid of a Tlaxcalan village to gain captives for slavery and blood sacrifice, and the Tlaxcalans will fight back!

Later that day, I will be teaming up with Greg Priebe of the H.A.W.K.’s to run a “what if” scenario. Let’s say a Viking raiding party got lost and while trying to get to Greenland and wound up in Tenochtitlan. Never to pass up the opportunity for looting and pillaging, they decide to make the best of it, but the Aztecs have other plans.  I think this will be a LOT of fun. Greg wrote the rules for the Feudal Patrol™ Vikings supplement – and we will use my Aztec supplement rules as well (Civilizations Collide). featuring a 1200’s Viking raid on the Aztec capital of Tenochtitlan!

On Saturday, I will be running a Feudal Patrol™ naval game – this time the epic Battle of Lake Texcoco.

TWICE! Once in the afternoon and once in the evening. After I ran this at HUZZAH! in Maine – I knew it was a hit.

The history is this – back in the summer of 1521 Cortes had a problem. To seize control of the Aztec island capital of Tenochtitlan, he realized that he needed to control the surrounding waters of Lake Texcoco (where Mexico City is now – the lake is long-gone).  This meant building a fleet.  Cortes had his troops build small brigantines in sections. These prefabricated pieces were then carried by his Tlaxcalan allies to the shore of Lake Texcoco, where they were assembled, and made ready for combat on the lake.  While simultaneously he sent land-based conquistadores to attack Tenochtitlan’s causeways, Cortes launched his brigantines to attack Tenochtitlan.

In his way were hundreds of Aztecs canoes waiting to swarm over the Spanish. This is the basis of this game.

So, you will have two chances to jump in on this game!

To my regular readers – YES I have been neglecting this blog – more a case of a lot hitting my schedule (mostly golf) – and I will be catching up with some of the miniatures that I have painted up and some games that I have run going forward. In the meantime, I am looking forward to reconnecting with you al soon – and I appreciate those who kindly checked in on me to see if I had assumed room temperature yet.

Thankfully, I have not – I think not yet anyways…