Last Saturday, we ran a playtest of the Wars of Orcs and Dwarves (WOOD) using Zoom. Chris Abbey from Sally 4th in the UK ran the game at his home – and his blog post on the game link is below. WOOD is an in-progress adaptation of the Wars of Ozz rules for fantasy battles.

It was a fun game and I (in Massachusetts) played on the Orcs and Goblins side with Greg Priebe in Maryland and Jim in North Carolina. We were fighting Dwarves led by Buck Surdu (in Florida) and Chris Palmer in Maryland. We purchased our troops unbeknownst to each other, and chose our deployment area first as we bought fewer points worth of troops. This also gave us a recon advantage. I was on the open end of the battlefield and Greg/Jim were on the wooded area. I threw my forces headlong (and somewhat piecemeal and unsupported) at Buck’s forces with the goal of tying him down – and allowing my allies to close to the road. While I took heavy casualties, the strategy worked well enough to gain a minor victory and for our orcs, great orcs, ogres, and goblins to feast on dwarves! As my wolves had routed, there was more for them anyways!

I think the rules system (Wars of Ozz) is quite good, and the new WOOD adaptation will allow me to use many of my old fantasy figures on the tabletop again. Plus I am really looking forward to playing Wars of Ozz! Below are a couple of Chris’ photos – his blog has more.

Here is Chris Abbey’s blog post link worth a look – check it out and let me know what you think! 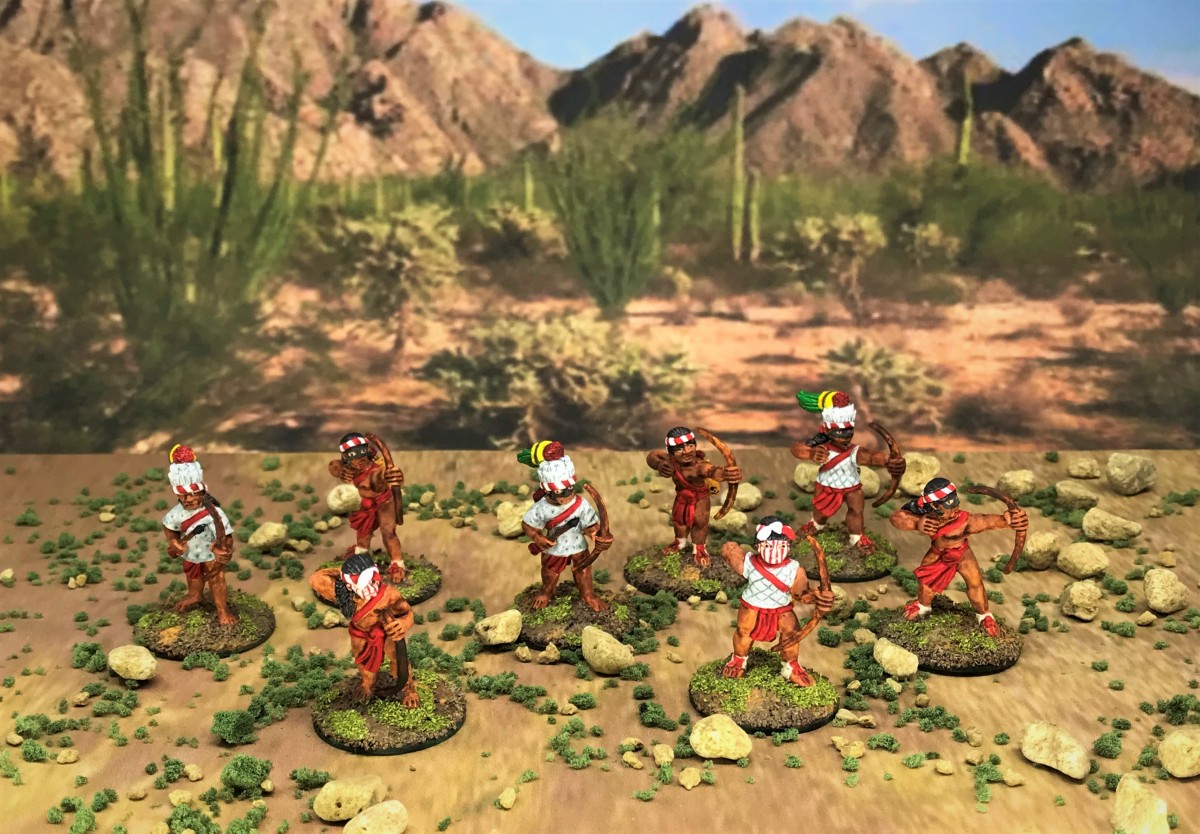 The time had come for me to get some opponents painted up to oppose the Aztecs of the Triple Alliance from Tenochtitlan (now Mexico City). In this case, these opponents are the Tlaxcalans, a Nahua ethnic group that never was conquered by the Aztecs. They did briefly fight Hernan Cortez and his conquistadors before allying with them against their longtime-hated enemy, the Aztecs. They were noted as being a major part of Cortes’ forces, and for having excellent archers. In my Tlaxcalan figures, have a group of veteran archers, a group of novices, a small command group, and a group of elite warriors for games of Feudal Patrol™ using my supplement called Civilizations Collide. All will eventually be shared here. They all are 28mm scale metal models from Outpost Wargames Services acquired from Badger Games in the US.

After the Zoom play test that I had described here, it was time to get some Tlaxcalans into the fray! I start her with TX4 “Tlaxcalan Archers”, an 8 figure set.

I chose to start with these archers as they had no shields to paint (time saver) – but also because the Tlaxcalans had a couple of very interesting types of war paint on their faces. From the Osprey plate in one of my books, one style resembled a black “superhero mask” around the eyes. The other one was a series of fine red stripes on a white background. Not all Tlaxcalans had war painted faces, so I could mix in some regular tanned skin as well. Given that some of the 8 figures were similar, this would aid in tabletop differentiation as well. Lastly, painting this unit would allow me some good practice on the faces with war paints as well as the common color themes of the Tlaxcalans according to the Osprey plates (which themselves were based on the various historical codices of the period). I chose to paint 4 figures with the black mask war paint, 2 with the white and red-striped painted war paint, and 2 with no war paint at all.

It would be appropriate for me to make a few more points on paints here. While I do list all the paints that I used at the end of this post for those interested (and for me when I forget and want to know I ended up using when I have another similar future project!), I want to share a few key items.

First, I tried a new tanned flesh paint that I really liked – Army Painter “Tanned Flesh”- and it worked well. I thinned it appropriately as a base coat and used other lighter paints, contrast paints, and washes over it as shades and highlights. Second, I also want to give credit to Faust at Double Down Dice as I had not tried Citadel “Gore-Grunta Fur” for wood – as I did here for bows. I had seen his work on his blog here and was impressed enough to give it a shot. Third, I used Citadel “Averland Sunset” and Vallejo Model Air “Black” to recreate a slightly different color pattern on the quivers to represent them being made from jaguar hides. And lastly, I gave the steel washers a different color – Citadel “Caliban Green” – than the tan undercoat that I had given the washers under my Aztecs. It only shows on the rim of the bases, but I think will help with tabletop differentiation. Many of the poses are similar, and a few are the same (6 poses and 8 figures).

Overall, I loved the figures, but painting them was a bit more challenging than I had thought. The main difficulties were around getting the flesh to where I was happy (again working with a new flesh tone), and the bright reds, black hair, and dark flesh next to bright whites – especially on the headbands. You can judge my efforts, though I did not do as many WIP shots here. You can click on all the images here for a better view.

So let’s get a look at the completed models!

I hope that you found this post enjoyable. Let me know – and stay safe out there!

Total figures to date for this project: 79 figures:  71 Aztecs, 8 Tlaxcalans