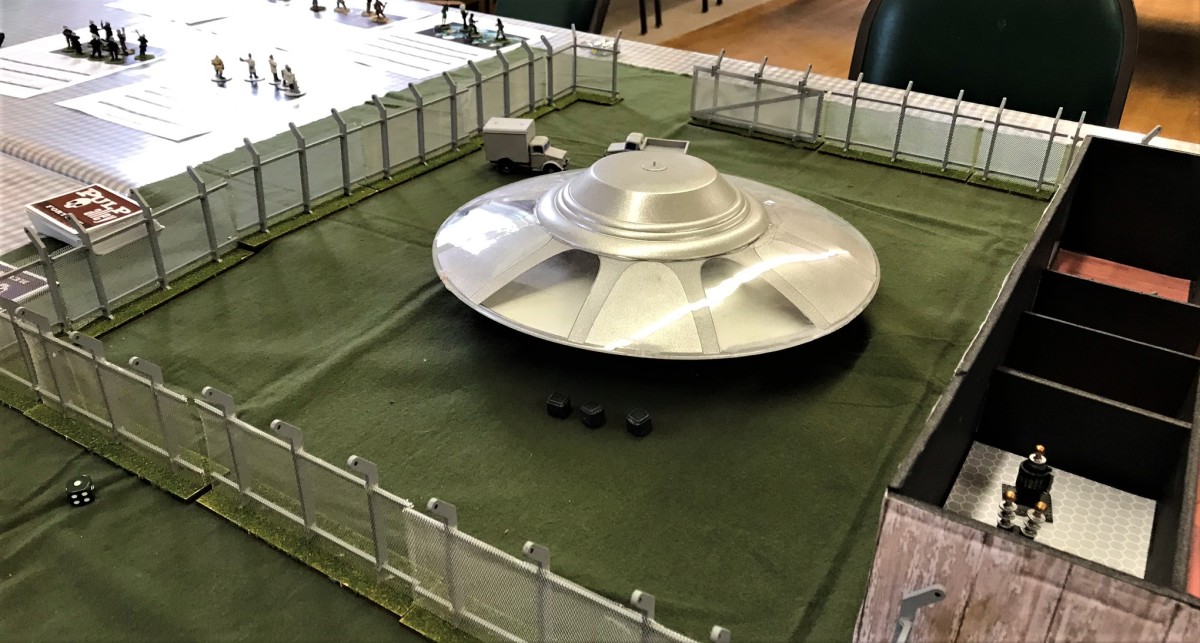 We had a very fun game of Pulp Alley last Saturday at the Mass Pikemen Gaming Club’s April session.  Scott Howland did a smashing job at running his scenario.  It involved four WWII (well, sort of) allies trying to seize key control points from evil Nazi Scientists and their reanimated zombie troops.

I played on the Allied side along with Jared (running a squad of Russians) and his son Jack (running an eagle-eyed group of Americans – replete with an eagle-headed leader).  My squad was a retro-sci-fi group of heavily armed dudes with jet-packs (those of you who have seen my sci-fi games know I love troops with jet-packs!).

We entered the game on four corners – and needed to seize various control points by turn 6.  Anything we did not seize would default to the evil side – which in this case was Scott’s son Ethan (controlling the mad scientists in the building) and Mike (controlling the reanimated Germans).  The control points were multiple: gaining possession of two alien bodies in a lab; gaining possession of three crates by the UFO; seizing some electronic gear in one of the labs; and accessing and downloading information from a couple of computers in the lab.

Only Ethan had played before, and the game went smoothly.  There were cards that you could play to affect action, and you could play them for your allies which was nice.

All in all it was a fun quick game.  The final was 6-3 for the Evil Nazi Scientists.  I liked the figures and the set up a lot – very cool and thanks to Scott for running such a cool game.

Our next sessions are on May 11th and June 29th – likely some What a Tanker and some Retro-Sci-fi Combat Patrol!

Battle Group Boston’s HAVOC 2019 (or HAVOC XXXV) is in the books.  This previous weekend in Shrewsbury, MA was a Friday-Sunday gaming marathon that saw me run two games (“What a Tanker” in North Africa and “Attack of the Warbots” using Combat Patrol™).  I also played in three other games: a First Boer War scenario using Combat Patrol™; “Look Sarge we are Invading Russia” using Look Sarge, No Charts™;  and another “What a Tanker” game on Sunday.  I have not been blogging much recently as my prep for the event took a lot of time.  So, this post will share some shots of the events, with more focus on the games that either I ran as a GM or participated in as a player.

Of note, it was very nice to have my West Point classmate and good friend Dave Wood from the Maryland HAWKS make it up to play in my games and run two of his own.   It was also great to see attendance and gaming from the Mass Pikemen, especially Mike Morgan, Leif Magnuson, Chris Comeau, and others.

On Friday, I ran “What a Tanker – North Africa” and had a full table.  I was able to roll out my new Bonus Attack cards that I created for the convention.  They were very popular in the game and I will be expanding my use of them in the future based on the scenarios I run and the historical aspects of the specific theaters and scenarios/battles.  I will adjust their use, and how I allow tank replacements going forward.  Still, the game went very well, and I earned an award for the “Best in Time Slot”!  The Axis battled back from early losses and defeated the British 104-58.

Saturday, I played in two games, and ran a third.  The first one Saturday morning was “First Battle of the First Boer War” using the Combat Patrol™ rules system as modified for this era.  It was a fun game, with the Boers holding off the British as they attempted to seize a wagon.  In the end, the Boers prevailed.

There were many other games – over 56 I believe, and I did not get a chance to take a picture of all of them, but here are some shots below.

The next game went up in operational level and down in miniature scale.  Dave Wood ran “Look Sarge, We are invading Russia”, using the Look Sarge No Charts set of rules and 6 mm microarmor.  The Germans held off the Russian counterattack, and won the game.  Both of Dave’s games were very well-received.

Skipping to Sunday, Leif Magnuson ran a nice What a Tanker game using 28mm tanks in an Eastern Front battle.  It was a lot of fun, and the Soviets eked out a win.  Leif also won an award for “Best in Time Slot” – well-deserved.  This meant that our club (The Mass Pikemen) won two awards – and both were “What a Tanker” games!

“Ivan is a Tanker” run by Leif Magnuson.

Flashing back to Saturday night – I ran an updated “Attack of the Warbots” game.  The game was a success, as the players had a great time.

At this point in the battle, Duck Wader made a power leap with his Sith powers, and drove his light saber into the Warbot tank, resulting in its disabling just two inches from victory.

Nearby, Roberker, a giant robot (with flame-throwing arms) was the Warbots’ last chance.  The Frinx shot Roberker a bit, and its resulting morale check caused a miracle result – apparently the robot lost face, ran away in shame, and blew himself up!

The death of Roberker was followed by raucous laughter from the table – even from the player who had it happen to his Roberker.

I was tired after the weekend, but it was a great time.  I want to thank all the players, as well as the GM’s, and especially Battle Group Boston for another fun convention!

The Third Incarnation of the Point of Singularity

A blog about board games, board game strategy, miniature games, and tabletop RPGs. Love the Game.