On October 19th, 2019, the Fort Devens Gaming Day was held at the Fort Devens Museum.  This was our monthly gaming day as an “away” game day for the Mass Pikemen Gaming Club.  Our club sponsored two games as Scott Howland ran a pulp game in another room which was very well-received. I believe it was similar to this one.

This was my second time attending this small convention and my first time as a game master there.  For nostalgia alone, I really looked forward to the event as I was stationed at the old Fort Devens before it was closed in the 1990’s.   It has since been converted to commercial uses and some US Army Reserve functions.  Running a game here was fun. 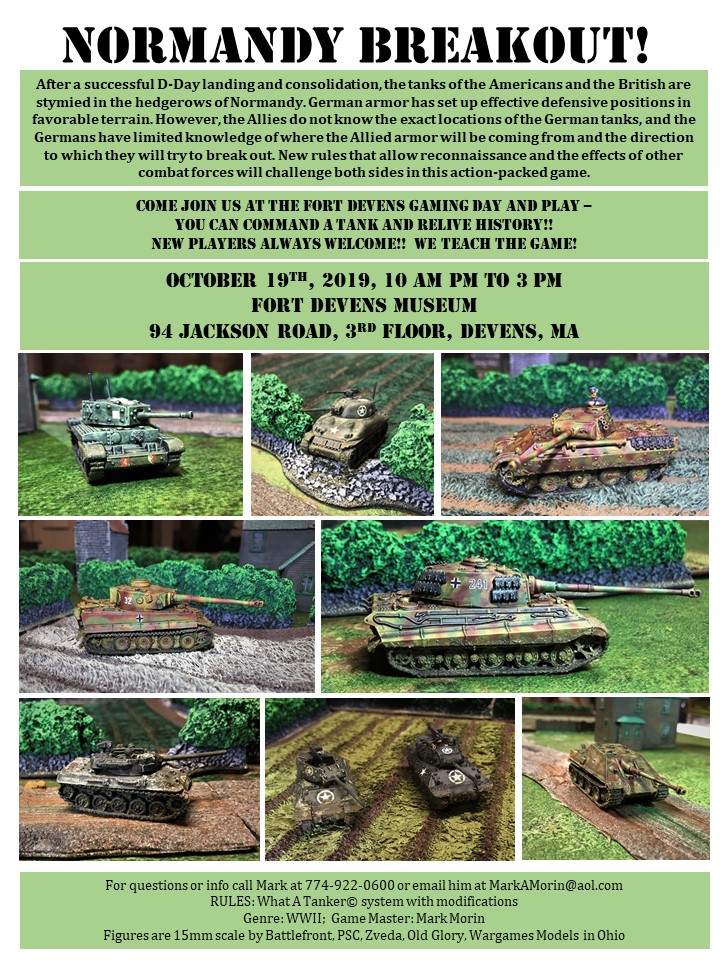 Mike Morgan graciously helped me set up my game in the museum among the exhibits (as you will see below)).  Thanks so much Mike!  Mike also supported Scott as a player in his game, and that was very cool.  I ran my Normandy Breakout game for What a Tanker©.  We had seven players – including several from the Mass Pikemen.  On the German side were Chris, Peter, and Steve.  On the Allied side were Leif and Walter (US), and Evan and Alex (UK).

Both sides started with 150 points/chips to use during the game.  The Allies started with a 40 points worth of vehicles.  For the UK, they bought a Dingo scout car and a Churchill “TIM” (nicknamed for theimperfectmodeler aka TIM), along with an M5 Stuart, and an M8 Greyhound for the US.  The Germans spent slightly less, choosing to buy an SdKfz 231 scout car, a StuG IIIG, and a Panzer IVH for 36 points.

The Germans took up very good ambush positions – especially the Panzer IVH, which was hull-down behind a stone wall.  The M5 Stuart successfully reconned it, and the German fired point-blank at the light tank, missing it.  The Stuart then prudently backed up behind the hedgerow.  The Churchill “TIM” then moved up the road, to be also shot at, and again missed by the Panzer IVH.  Amazingly, the Churchill immediately reversed the bad German die rolls, and miraculously hit and knocked out the Panzer IVH for its first kill ring of the day.

The Allies then successfully reconned nine possible German positions at 2 points apiece, adding to their score.  They also successfully crossed the tabletop with an M8 Greyhound, gained the points, and respawned as another M8.  The Germans spent some points and respawned the destroyed Panzer IVH crew into a Panther D which drove up next to the burning Panzer IVH.  The Churchill “TIM” went Panther hunting.

Meanwhile, the Germans tried to put an end to the Allied reconnaissance successes.  The StuG IIIG ambushed both the M5 and the Dingo gaining them crucial points, which they used to buy a Marder III.  The Allies respawned both losses with similar models.

The Allies spent some chips to respawn the Dingo as a Cromwell IV nicknamed “IRO” aka imperialrebelork.  The Germans dropped some obscuring smoke in front of the Cromwell.

“TIM” continued its winning ways and managed a flank shot on the Panther D.  Its good dice rolling (and the German bad dice rolling) yielded a second kill ring for “TIM”.

The Germans were aghast at this expensive loss and vowed revenge.  The SdKfz 231 managed to call in a rare Luftwaffe air strike on the Churchill, which destroyed “TIM” after it had been so effective.

The British mourned this loss, and respawned it as an Achilles 17-pounder nicknamed “Per”.  The British also bought another Dingo and a Cromwell IV nicknamed “JNV” or justneedsvarnish.  The US bought an M10 Wolverine.  The Germans went for broke and bought a Jagdpanther and an SdKfz 233.

The StuG IIIG went head-to-head with the Cromwell “IRO”, and took it out.  The Jagdpanther caught the Achilles “Per” in the open and made short work of it.  In the meantime, the Allies successfully crossed a Dingo and an M8 Greyhound.  This resulted in denying the Germans any end of game bonus points for preventing more than two Allied vehicles crossing the table.

To make matters worse for the Germans, the respawned M5 Stuart knocked out a well-hidden Marder III with some help from a supporting infantry assault (see how I use bonus attack cards here) and well-placed 37mm rounds.  As the game was winding down, and it was clear the Allies had a commanding edge in the score, The Germans bought a Tiger I and converged all vehicles on the plucky M5.

At games end, the final score was Allies 193, Germans 142.  This game yet again delivered a different result.  Player choices, and player luck all made this game fun and unique.

This is my 12th post about my development and running of this scenario and the models that went into making it.  I started back in May 2019, so it’s been a lot of work, but one project that I really am proud of now.

I wanted to honor the history and the struggle of the Allies in the days after the D-Day landing 75 years ago.  I will continue to run the game, and at this point I really only need to add a StuG IV to be really complete vehicle-wise (and I have one to build!).  To read about previous games and related posts, see the following:

Thanks to the Fort Devens Museum, Peter Lowitt. and the guys at Fencing Frog Gaming Adventures for running the event.  I hope to see you next year, if not sooner.  I also hope that some of the players join us at The Mass Pikemen Gaming Club.

I hope you enjoyed this post and would love to read your feedback!

On October 20th, there was a Devens game day at the former Ft. Devens in Massachusetts.  I was interested in attending for a couple of reasons.  First, I am trying to get to more gaming events in the area.  Second, I was stationed at Fort Devens while I was a member of the 39th Engineer Battalion (Combat) from 1989-1992, so I was intrigued to see the post again in its new configuration.  Fort Devens was closed as an active duty US Army post in the 1990’s, and Massachusetts has redeveloped the post by bringing in a lot of industry.  Still, some of the post is used by the reserves.  In fact my old battalion area seems to have been saved and redeveloped for the reserves.  That area is all fenced off now and I did not want to photograph the area and draw unwanted attention to doing so!  Other buildings and barracks areas are untouched since closure, with actual trees growing out of the edifices yielding an apocalyptic/Walking Dead look.  This blog post is a bit late, but I did get wrapped up in the baseball ALCS and the World Series, which were both won by the great Boston Red Sox!

The actual game sessions were held at the Fort Devens Museum.  There were three games there – a WWI game, a naval game, and a pulp game.  I did not get any pictures of the naval game but you can read about in an excellent post here.  I focused on playing a WWI game (given that it is close to the centenary of the end of that conflict).  The board is entirely scratch built, and I believe the rules were “Trench Warfare”, but I am not sure.  The game master, Bill, did an excellent job, and I wanted to share his board as it was excellent.  The event clearly tried to recruit younger gamers, which was admirable for growing our hobby.

The game ended in a draw, but I enjoyed it a lot.

There was also a pulp game that I did not play in, but that looked interesting.

Lastly, I looked around the museum and looked for anything related to my old unit.  The only thing I saw was a donation from a former lieutenant from the 1977 time frame.  I do think I could find a few things myself.  Interestingly, I am a local, and the 39th had members who for the most part live in other parts of the country.  I do commend the museum for trying to resurrect the posts history from WWI until closure.