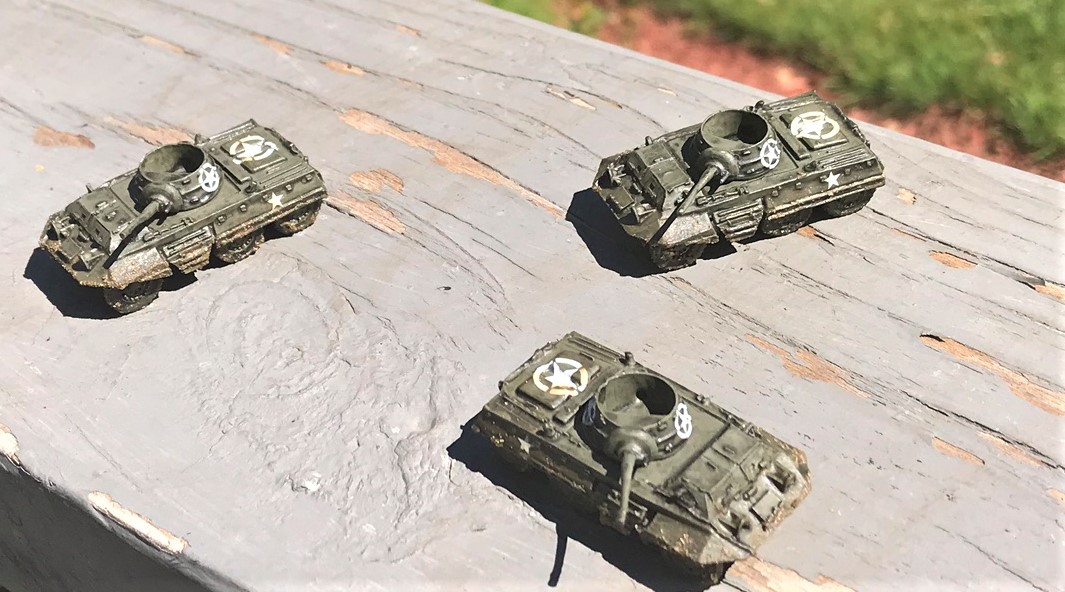 In my last painting post, the Germans got some recon vehicles.  For my Normandy Breakout scenario for What a Tanker!©, I wanted some American and British scout cars.  I have some rules modifications and Bonus Attack cards for my games to up the action a bit – as well as to create a more rounded scenario – and recon is one of my additions that I will discuss and share in my next post.

I put some new edits to this post in blue!  Mea culpa and read on please!

Back to gathering the models – I ended up with American M8 Greyhounds and Daimler Dingoes.  It was difficult to find suitable 15mm/1:100 scale models.  From Noble Knight Games, I found a couple of 3 Dingo blister packs of Battlefront Daimler Dingoes (#BR310 – now out-of-production).  I got these a few days before I was scheduled to run the Normandy Breakout game – so time was not on my side.  I built one pack for Normandy and will save the other one for North Africa.  As for the M8 Greyhounds, I ended up buying a three-vehicle bag from Old Glory of Command Decision models (#CD207).  All of these arrived the week of the game.  Tick tock….

The Dingo trio came with bendy metal machine guns to mount on top, but I did not see these surviving tabletop play – or even being easy to mount.  I think the Dingoes work well as I completed them.  If I ever get a few Daimler Armored Cars, or any Humber Scout Cars, they would be easy and fun to add to the British forces.  The Dingoes’ crews of two were not very detailed, but I tried my best.  The Old Glory M8 Greyhounds did not come with crew, and I saw afterwards that you can buy crew separately from them;  however, by then it was too late for my schedule.  The M8’s also had machine guns, but these models are all metal.  The 37mm guns on the M8’s were spindly enough, so for the same reason as the Dingoes, I left off the large machine guns.

CORRECTION:  I assembled the Dingoes incorrectly and fixed them – see notes in blue and at the end of this post!

Normally, I set up my completed minis on a tabletop, but given that my game was coming up, I decided to take some shots of them in the sun on my deck railing (yes, the deck needs paint but will be replaced soon I hope!).  This is after all Massachusetts – stuff weathers naturally!

The biggest challenge with these was their size, followed by the US stars on the M8’s for aircraft ID.  It was different for sure.

My next post will detail these vehicles’ experiences in their little battle last Saturday!  There was some action for sure.

Thanks for looking!  Any favorites?  Comments?  Always appreciate your feedback in the comments section!

Well, I am a bit embarrassed to say that when I built my Dingoes I put the crews in backwards.

We even played with them last weekend and none of us, being Americans, knew they were wrong.  I should have paid better attention –  but I was able to correct the problem – luckily I had used E6000 epoxy to mount the crews instead of Gorilla Glue so they were easier to remove.  I did have to repaint them a bit and reapply varnish.  I have changed the pics above to reflect that!  My apologies to the British Army and the British Empire!  It was not a 4th of July joke!

29 thoughts on “Dingoes and Greyhounds for Normandy”