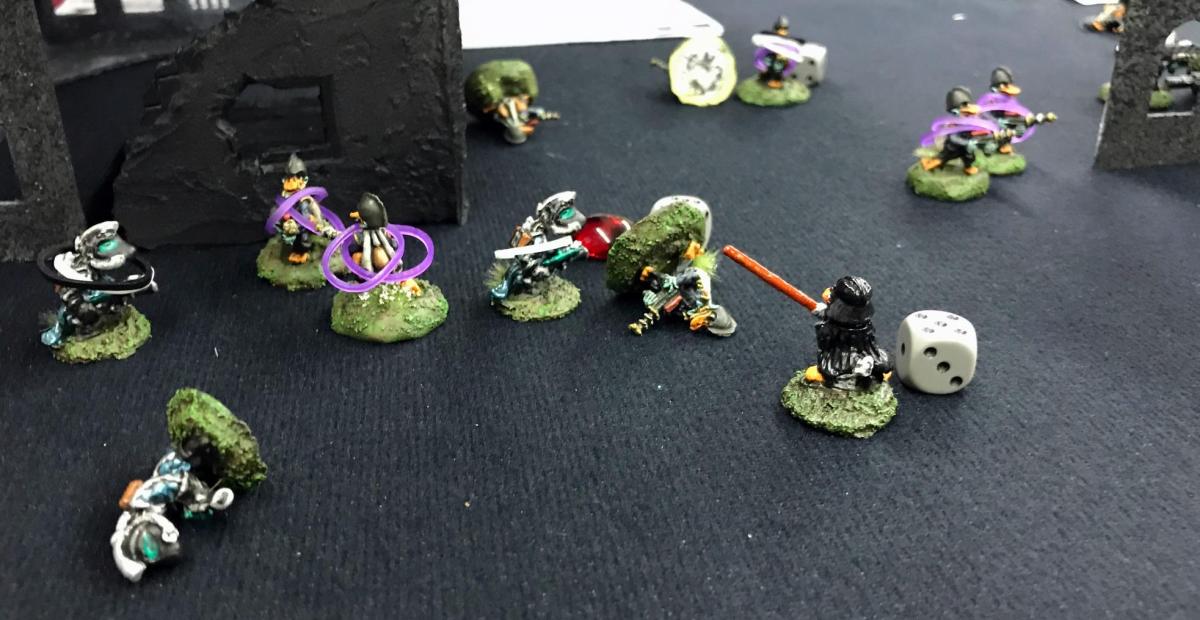 To round out September, the Mass Pikemen Gaming Club ran a game during which the Star Ducks attacked the positions held by the Power-Armored Frinx.  Both of these forces are from Archive Miniatures circa 1979-1981.  You can learn more about their origins here.  Click on Star Ducks or Power-Armored Frinx to learn more about their platoons.  We used the Combat Patrol™ system, with modifications to approximate the abilities of the Star Ducks to use their jet packs, and the durability of the Frinx as a result of their power armor.  The Frinx also had the support of two Archive RVS86 “Robot Cooks” which were analogous to small self-propelled guns.

The scenario was one where the Frinx, led by Lieutenant Ma’k were defending some old ruined buildings that held some lost technology – and the Star Ducks, led by Duck Vader, were hell-bent on getting into the building and killing Frinx in general.  The Frinx, on their part, desired to dispatch the Star Ducks with extreme prejudice.

The Star Ducks used their jet packs to quickly advance towards the buildings on the Frinx’s left flank.  You can see the small purple rubber bands on the Star Ducks, which indicate the number of “jumps” that they have taken.  Due to limited fuel, the Star Ducks have only three jumps per game, but they do help!

In the middle of the table, a pitched ray gun/blaster battle left several dead and wounded Frinx.  The Star Duck team making this assault was however, annihilated, as Frinx Staff Sergeant A’Haze led his Frinx ably and directed their fire.

The only Star Duck survivor in this area was Staff Sergeant Bufflehead.

And then this happened…and the other RV86 was immobilized as well by bazooka fire from the other flank.

Meanwhile, back at the buildings, the Star Ducks jumped again, going over the ruined buildings, and assaulting the Frinx from the rear.  This move was met effectively by the Frinx with Platoon Sergeant First Class Grengelu’s automatic grenade launcher, wounding and killing several Star Ducks.

However, there were enough Star Ducks to close with the Frinx in hand-to-hand melee (or is it claw-to-wing?) and begin to clear the buildings.  SFC Grengelu was overcome and killed in the scrum.

At this point, the game was called due to time and was determined to be a draw.  While the Star Ducks had cleared one building completely, and another one partially, they still had a couple more to go.  Casualties were high on both sides!

The game was a lot of fun and the battle was touch and go all night.  Once again, Buck Surdu’s Combat Patrol™ system demonstrated its great versatility and ease of play!

I hope you enjoyed this battle report – please share your feedback in the comments section!