On Saturday, July 27th, the Mass Pikemen met for our monthly gaming session – this time it was another go at “Attack of the Warbots“.  This game uses the Combat Patrol™ rules system, and the figures are Archive (from the late 1970’s/early 1980’s), Mega Miniatures (late 1990’s/early 2000’s), Wargames Supply Dump (now OOP), or my own creations.  The links below for each can tell you more about them if you’re interested. 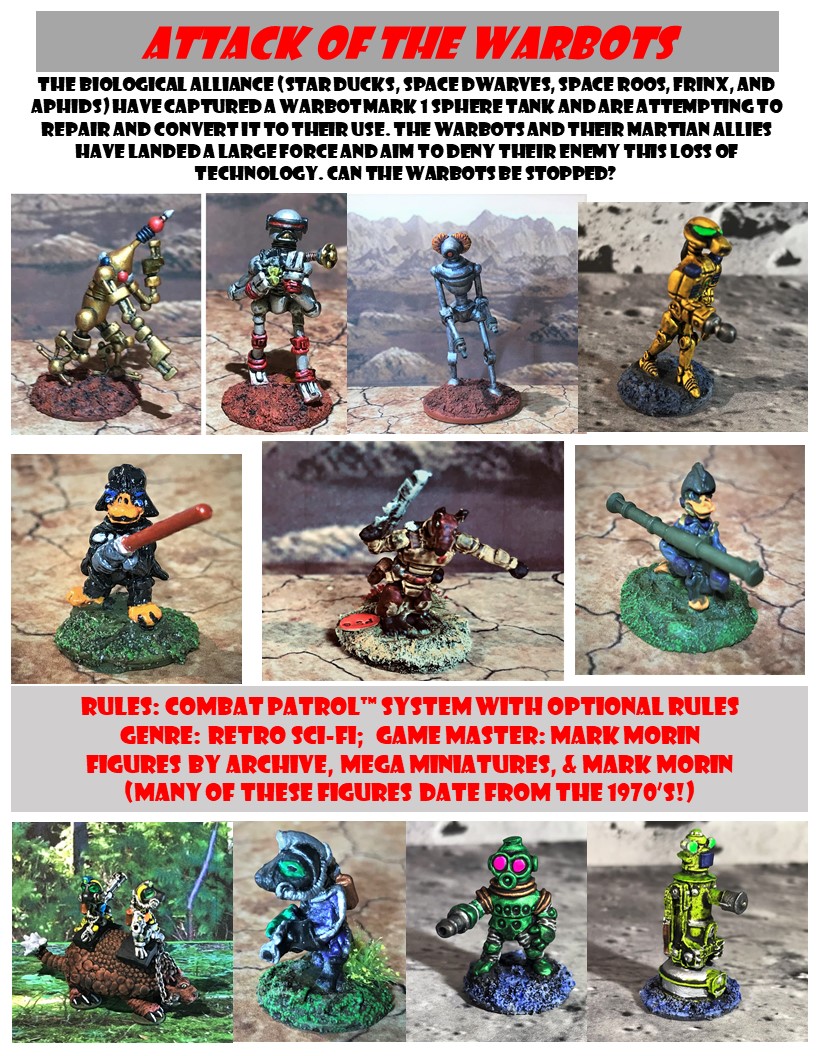 The Warbots, led by two Juggerbots and Khang Robots – supported by two Mark 1 Sphere tanks were attacking a defended wall on one end of the table.  Half of a Space Roo platoon and a squad of some Aphids looked to stop them and protect the wall.

On the other end of the table, their Martian allies and a Roberker were attacking through some barriers and a ruined chemical plant as the Space Roos and Star Ducks responded.  Meanwhile, inside the compound, there was RT-22 (commanding some Robo-Servo guns that were around the compound) and helping a Space Dwarf Assault Squad to repair the captured Mark 1.  These were desperately attempting to repair a captured Mark 1 tank before the enemy stormed their repair facility.

The game went quickly once it started.

On the first turn, the Mark 1 above did not get to activate as no “5” came up.  The Warbots chose not to pay one of their bonus chits to get a “5”.  This allowed Leif to jet pack up a Space Roo with an RPG – who got a lucky hit and destroyed the tank.

Christine’s Aphids meanwhile took heavy fire from the Warbots and Juggerbots, and were in danger of being wiped out.  The remaining Mark 1 approached the wall.  Leif jet-packed a lone heroic Space Roo over the wall to attack the tank with a satchel charge, only to stun it.  The Aphid Platoon Leader, Lt. Hemipteran, valiantly attacked the other side of the tank with a satchel charge, and the remaining Mark 1 brewed up from the explosion.

Meanwhile, on the other end of the board, Mike was making good progress with his Martians and his Roberker.  Unfortunately for Roberker, a lucky Space Roo bullet hit his CPU, causing him to go rogue.  In the game, a rogue robot attacks whatever he can see.  Luckily for the attackers, he went rogue at the enemy Space Roos (commanded by Leif), who were eventually able to put him down with rifle fire and some of Christine’s Mortar duck supporting fire (called down ON TOP OF the Space Roos position).  This was done with Leif’s approval – his Roos were valiant.  Of course, several Roos bought the farm here.

Meanwhile, the Warbots on the other end managed to fire a plasma arc weapon and breach the wall such that one of Chris’ Warbot figures could go through at a time.  Simultaneously, Leif successfully pulled some high cards and luckily repaired the captured Mark 1!

At this point, the game was called with a marginal victory for the Biological Alliance.  They would have had to get the tank off the table, and there were Warbot reinforcements coming.  My new ruined chemical plant had a lot of action!

I did not get a chance to take as many pictures as I’d like, but the game was very much touch and go.  Thanks to all the players and see you next month on Aug 24th for another What a Tanker© game.