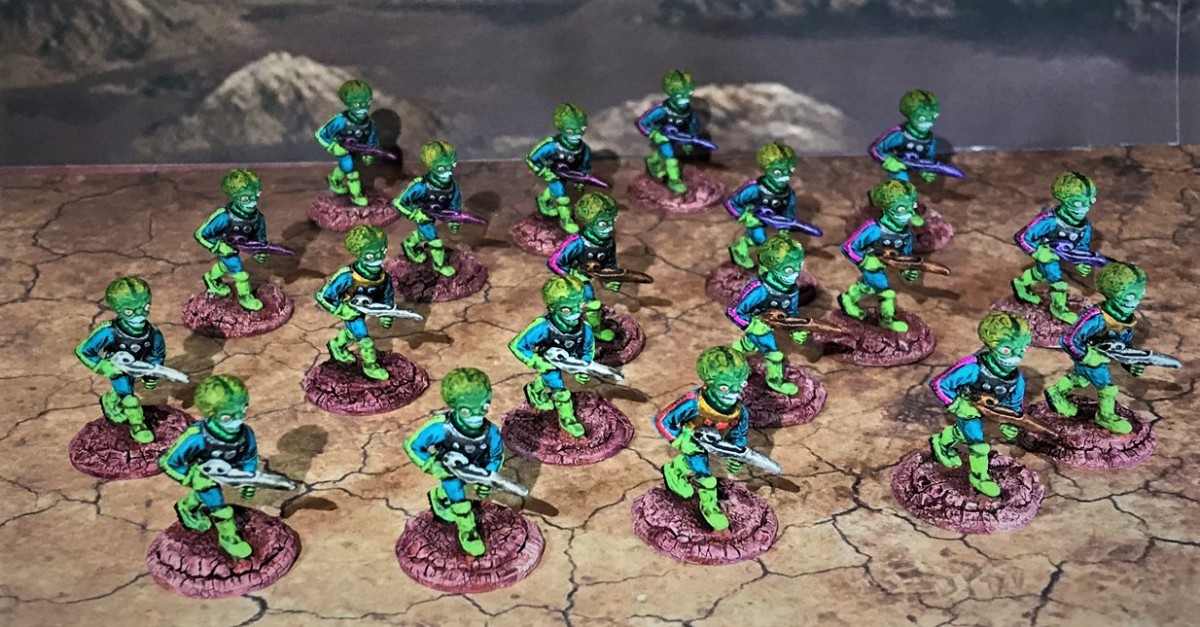 I am always searching for cool old school figures that are out of production that I could use in my Combat Patrol™ retro sci-fi games.  This is firstly because I like to find neat stuff that time has passed by – and expose the figures to a brand new audience.  Secondly, it allows me to run really fun games – as the rules are so easy to play and learn even for true newbies – while older gamers are simultaneously having a good time.

Fortunately, I came across Michael Thomas’ site, classicminiatures.net.   There I found many Archive Star Rovers figures that he could cast (as he has a spin caster and now owns many original molds).  I acquired my Space Dwarves (Archive’s Long Gone Jones) from him, and he suggested two others that I might like.

One was also previously described in this blog – that being Mega Miniatures Robot Peacekeepers.  These were my first figures from that now-defunct company.  Michael piqued my interest with a second figure, which was Mega Miniatures “Mars Alien”  (#71501 seen here in the Lost Minis wiki) from their Sci Fi Future range Aliens subset.  It looks like the figure is the only one in that group, and was OOP in 2003.  It was sculpted by Hermann Grassnick, and the rights were sold by Mega Miniatures in 2011 (I am assuming to Michael Thomas).   I got 19 of the figures for a two-squad Martian platoon.

So when looking at these, one immediately sees their resemblance to the Martians in Tim Burton’s 1996 film, Mars Attacks.  You remember, the Martians speak “ack-ack” (which was the sound of a duck quacking played backwards).

Interestingly, I wonder if there was a copyright issue that caused a cessation of production?  I was also completely unaware that a UK company called Mantic Games put out a Mars Attacks game complete with figures and terrain.  I looked through the Mantic website, but it looks like the game is not really available or at least not supported much, or that Mantic is just selling whatever inventory it has of its components.  (Side note – I did also see the Kings of War game there which I have seen referred to often in the blogosphere. If I ever get back to fantasy armies, perhaps this will be a resource!).

Back to my Martians…

I did see that the figures from Mantic were colored like the movie, so I adopted that scheme for my Mega Miniature figures, which is a turquoise and lime green combination.  Of course, I thought I could finish these in time for a painting challenge by Azazel called “Jewel of July”  – after all turquoise is a jewel right?  But it was not to be, so these Martians got completed in early August.  There were no helmet bubbles or air tanks, but otherwise the figures were comparable.

I cleaned off any unwanted sprue residue, filed, and washed the figures.  They cleaned up easily, and the casting quality was good.  They are probably 25mm in scale (Star Duck size).  I mounted the figures to ¾” steel washers with Gorilla Glue, and then used poster tack to affix them to my painting jars.

I wanted there to be an easy way for the platoon to be used on the tabletop.  I decided that I needed a painting plan.  So I made one, using different colors for the weapons, armored vests, belts, and accouterments – it was 11 PowerPoint pages – and you can see one such example below.  This helped me to keep it all straight.  I list all the paints that I used at the end of this blog post for those interested – there were a number used!

As for the figures’ details, I did have an issue with the teeth and the brain folds (who doesn’t), as they tended to fill up quickly even with light airbrushing.  Eventually, I figured out how to present them in a game-worthy way.

I ended up using multiple very thinned applications of Citadel “Ceramite White” on the Vallejo Mecha Color “Turquoise” so that I could get the other colors to be more vivid.

I tried to match the colors from the movie on the skulls and brains.  It was tough, but I found that using multiple inks, dry brushing, and washing here was a winning approach.  My initial tries were too dark or too light as shown below.

After the painting was at a stage that I was happy with and what I wanted, I gave the torsos downward a good wash with Citadel “Nuln Oil Gloss”.  I like the results it gives with metallics. Still, the damn teeth were bedeviling me,  Washes were not working, and dry brushing them was not either.  They were fairly snaggle-toothed dudes.

My dental solution was to use a very thin and slightly jagged line of Vallejo Game Air “Black” just under the upper teeth – and I settled on that.

I then used Vallejo “Gloss Varnish” for my first varnishing application.  I planned on adding a matte coat after I finished the bases.

I then worked on the bases.  I decided to use Citadel “Martian Ironearth” on them.  I really like to get the crackling effect from that paint when you use a hand-held hair dryer on it as it dries.  So yes, I used a blow dryer on dudes that not only had no hair, but no scalps…in any case the bases came out fine.  Instead of using a wash on them, I dry brushed the bases sequentially with Armory “Brick Red” (from 1996) and P3 “Ryn Flesh”.  I liked the effect better than my previous uses.

Overall, I am happy to have some more “bad guys” to add to my retro sci-fi forces.  I do not think that they are my best work, but they are good enough, and should be fine for gaming.  And now, some action shots!

I hope you enjoyed this post – please let me know your thoughts and suggestions in the comments section.  And no, I will not have a Slim Whitman weapon that will kill these guys!

Thanks again – hope this was fun to see!!