This week I was able to finish off my 8th Army tank force for What a Tanker© games.  The group was composed of 9 Battlefront/Flames of War 15mm scale tanks – two A10 Cruiser Mark IIA’s, one A13 Cruiser Mark IVA, two Valentine tanks (a II and a III), two Crusader tanks (a II and a III), one M3 Grant, and one Churchill II.  These would add to my previous two A9 Cruiser Mark I’s and my two M3 Stuart “Honeys” tanks that I finished in November (those are discussed here).  Including a  couple of prepainted Matilda II’s that I had bought from Wargames Models in Ohio, my 8th Army force now has 15 tanks.  Noticeably absent from this group of course are the Sherman tanks that arrived in time for the British push at the Second Battle of El Alamein, but I am sure I’ll get to adding them eventually.  I wanted to have a group of earlier war tanks ending with the Grant and Churchill for now, as most folks are less familiar with them.

I did not take as many pictures in the assembly and painting processes this time as I wanted to get these done.  I need to move onto the Germans and the Italians!  My goal is to run these in What a Tanker© games at gaming club meetings and at local conventions.  I do feel that these, as well as my last tank project attempts, have been fun and have stretched my hobby skills a good bit.

I’ll cover each of the types individually, then some eye-candy shots at the end for your (I am hopeful) enjoyment.  Of course, I will list my paints and materials at the end for those interested.  I used my airbrush and standard brushes on all of these.

I finished three more cruiser tanks –  two A10 Mark IIA’s and one A13. 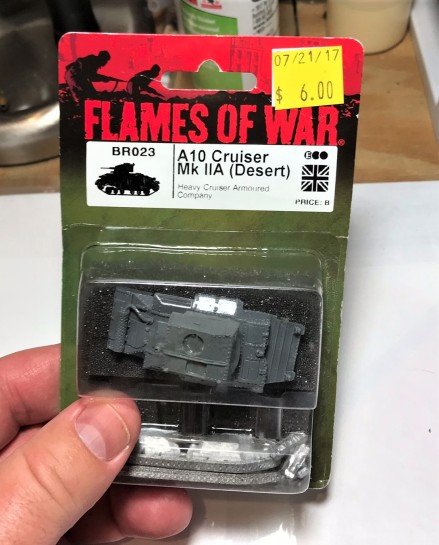 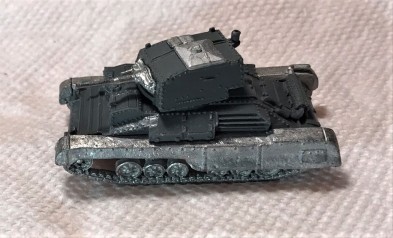 A10 prepped for assembly

I find that cleaning, filing, and general preparation of these models does take a bit of time.  I know that washing the resin parts is very important.  My last step in cleaning the resin involves a gentle brush wash/application of isopropyl alcohol (rubbing alcohol to some of you) to it.  This has been helpful I think – you just need to let that dry before handling or you may leave fingerprints on the resin.  I also added radio antenna aerials with 24 gauge wire if the model would withstand the drilling and mounting process structurally.  Sometimes, I just could not add one without damaging the model.

During the war, compared to the A10’s, the A13’s were much faster due to the Christie suspension and a better engine.  Combat wise, they were not much better, and are not better in the game rules either.  They are adequate foes for Panzer II’s and some Italian light AFV’s.

On all of my tanks I tried to use different FoW decals that seemed to make sense – they are so small! Of course, getting the decals to look sand-worn was important, and the pigment helped.  Getting the decals to conform to the curved surfaces took many slow applications of Micro-Set, Micro-Sol, and Liquid decal film. Our hobby blog-guru Azazel mentioned using barely-moist sponges to lightly apply pigments, so I gave that a shot, especially on the decals.  While I think I got a darker look, it did made the decals look less out of place, and I liked the effect.

I picked up the two Valentine infantry tanks on sale at two different hobby shops.  The track treads were a bit different.  Of note, the Valentine II needed significant reinforcing with green stuff to come together as it was either poorly designed or not well made.

For the Valentine II, I chose a Caunter camouflage scheme that was more bluish than what I had done previously with the A9’s or the Honeys.  That would help on the tabletop as well – and the biggest difficulty was masking the appropriate parts of the tank for airbrushing the blue.

I am not sure how effective the blue scheme was in WWII combat, but as the British abandoned it my guess is not very.  Still, it does look striking and different.

For the Valentine III, I went with a camouflage scheme that was more brown and sand.  I also added two aerials to this one.

I definitely wanted to have a couple of Crusader cruiser tanks in my force.  They do look good, though in combat their armor was not effective enough against their Axis counterparts.

My two Crusaders in blister

Base-coated and ready for final work

The British were not happy to get American tanks at first.  They did invent the tank after all in WWI, and they were proud of them.  They wanted the US to build British designs, but with the risk of the UK losing the war early on, we Americans balked and said we would only build US designs.  That way, if the British lost, we would not have our factories tooled for non-American designs.  One of these was the light tank M3 Stuart, another was the medium tank M3 Lee.  To placate the Brits, a different and more rounded turret was made than that of the American M3 Lee, and that is the major difference between a Grant and a Lee.  So, my tank is a Grant.  In doing my research, it was interesting to learn that the sponson-mounted 75mm gun was more prized (eventually) because it had an HE round.  That meant that the Grant 75 was far better able to deal with anti-tank gun crews, like the dreaded 88mm, than a solid shot AP round would have been.   In the turret, a 37mm gun was the main anti-tank weapon (though certainly the sponson gun was used in that role as well). 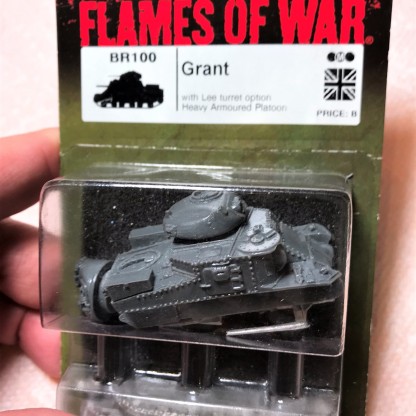 The M3 Grant in blister 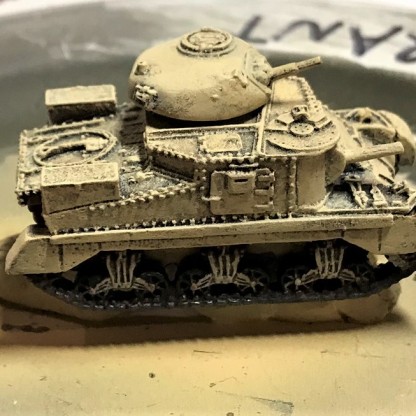 If the chassis looks familiar, yes, it was used as the basis for the M4 Sherman as well.

The Churchill infantry tank made its unhappy debut in the costly Canadian forces raid at Dieppe (these were Churchill Mark I’s).  The Churchill Mark II was first used by the “Kingforce” detachment (6 Churchill II tanks) in North Africa in October 1942, and Churchills were used in that theater and in Western Europe throughout the rest of the war.

I then masked this big behemoth (for 15mm).  The effort on this tank took some doing – I needed a lot of poster tack.

That concludes the history/what-I-did section – now for the…

Now it’s onto the Germans and Italians – which I hope to finish soon.  But never soon enough…

Thanks for looking, and I very much hope that you enjoyed seeing these.  Any favorites?  Feedback?  Winning lottery numbers?  Please leave me your thoughts in the comments section!

As for research materials, I used the same ones as I cited before – but for completeness here they are in case you are interested (you can find them on Amazon):

I would easily recommend all of these books as good resources for gamers and modelers.