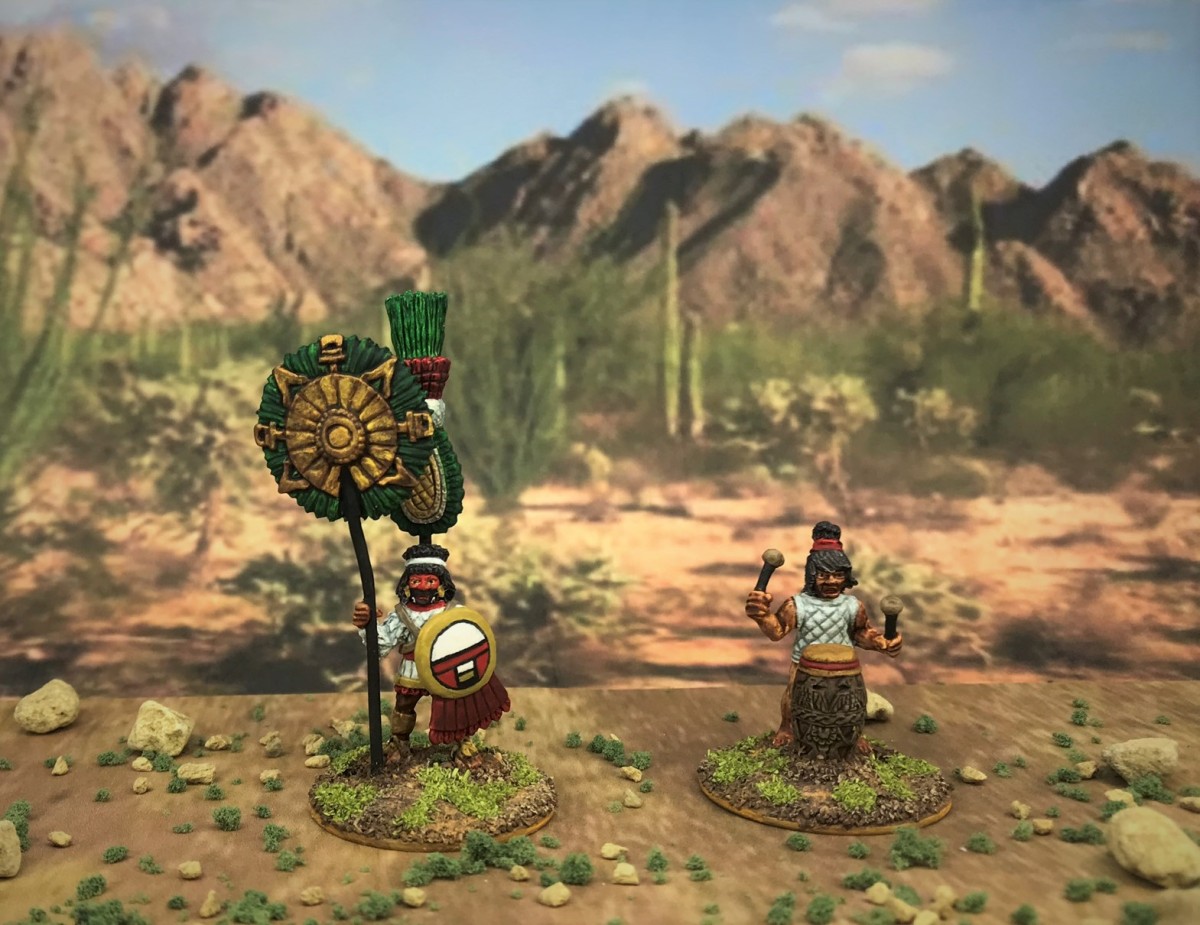 An army needs a leader!  My Aztecs troops will be used in skirmish warfare games of Feudal Patrol™ (check out these two links on the game here and here).

In the game, the basic unit is an Element of 5 figures, including a front-line leader. Up to four Elements will constitute a Warband, and up to four Warbands will make up a Battle Group. Similarly, up to four Battle Groups will constitute an Army. Most games will never be composed of an Army as the system is designed for skirmish level war gaming. Still, it could be used for big battles effectively.

At the highest level of course was the “huey tlatoani” or “Great Speaker” – the emperor of the Aztecs. Under him as the head of the War Council and the supreme field commander was the Cihuacoatl, also called the Snake Woman”. This was not a woman – but always a man – despite the name. Cihuacoatl was also a goddess of fertility and childbirth in Aztec mythology. Yes, it’s a bit confusing, and I’ll leave that right there.

As I previously posted, Badger Games was kind enough to offer me an Outpost Wargames Services baggie of OWS AZG001 – General as Snake Woman priestess w/drummer. It consisted of an Aztec/Mexica General replete with back ornament and a standard of Quetzalteopamitl (serpent of precious feathers). Back in the day, both were adorned with lots of gold and quetzal feathers. A wonderful image is found on plate A of Pohl’s Aztec, Mixtec, and Zapotec Armies. It was a nice chance to work on two figures at a time instead of 21!

The model was fairly straightforward, though I needed to make a rig of clothespins, poster tack, and specimen bottles (seen below) to paint the back ornament and the banner. Mold lines were easy to deal with on these, and the details were nice.

The challenges here necessitated using slightly larger washers as bases – and 1.25″ washers along with some smaller ones and some plastic card were needed (a list of materials is at the end of this post for those who are interested). As far as painting, care had to be taken with the components so as to not damage them during the build as well as to protect their paint jobs. A little varnish along the way helped here. The other major challenge was on the generals face painting. The details (such as the white markings on the lower blackened part of the face) here were the smallest I have ever attempted on 28mm figures.

I hope that you found this interesting. I am moving on to working on other troops – and A GAME (remotely run) next week with players in 3 US states and the UK – more to follow soon!

Until next time – take care and stay safe all!

Total figures to date for this project:  71 Aztecs

PAINTS, INKS, GLAZES, SHADES, WASHES, PIGMENTS, FLOCKING, GLUES AND MORE THAT I USED ON THE AZTEC SNAKEWOMAN AND DRUMMER:

Thanks for looking – I am entering this project into Azazel’s extended July/August community painting challenge in the “hero” category. Please feel free to comment below – always appreciated.