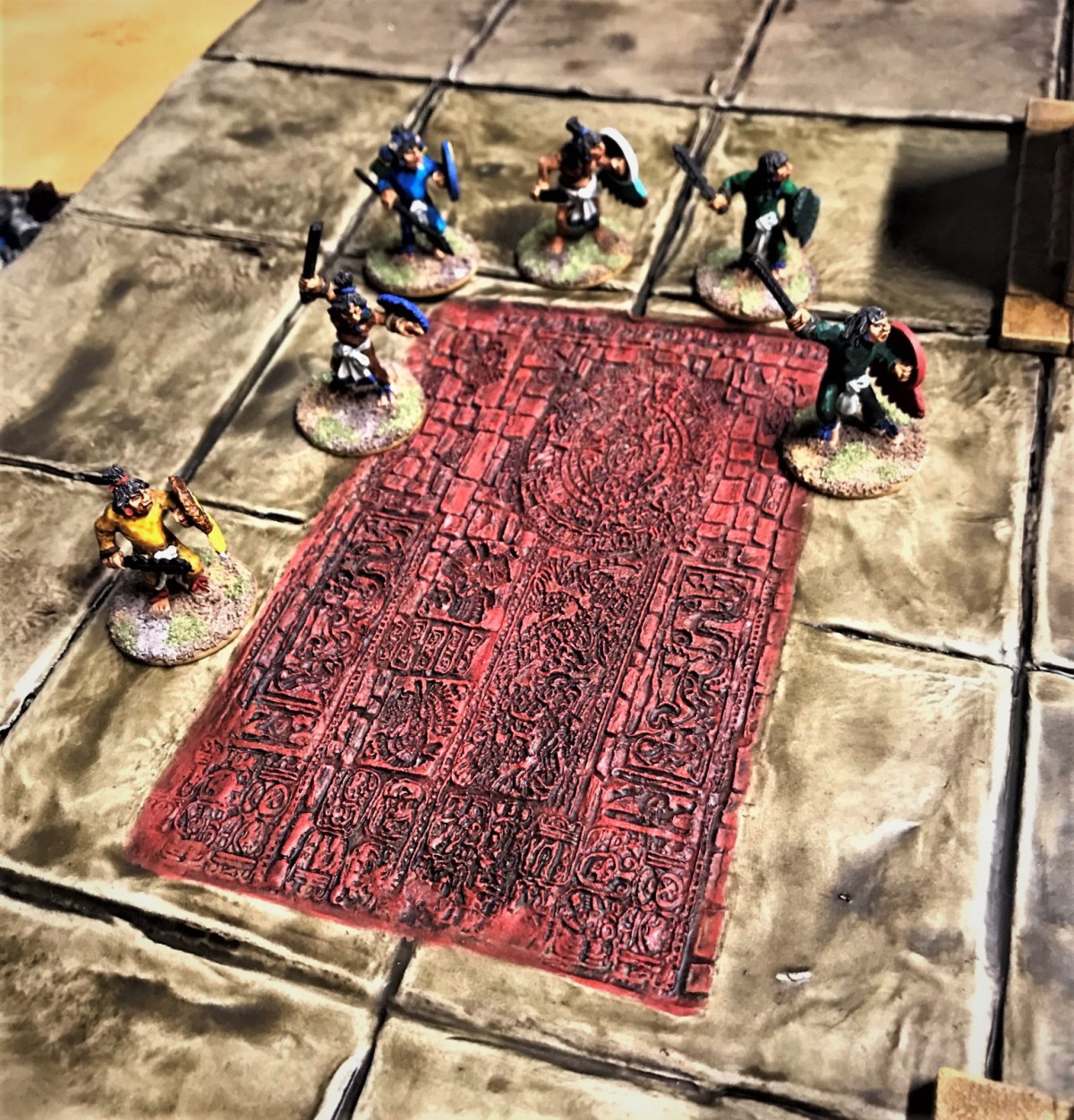 An Aztec cityscape gaming table would be incomplete without the use of proper pavements. Tenochtitlan was not built to look hardscrabble. These pavements would need to go under the massive buildings I had to represent the city of Tenochtitlan, the capital of the Aztec Empire.  This post will cover the pavements I made for the cityscape. As I shared in my previous post, Building an Aztec Cityscape – Part 1: Causeways, Lifting Piers, and Removable Bridge Sections, I will similarly share my WIP photos as well as my lessons learned.

Many contemporary images of Tenochtitlan show a brilliantly white city. I am not convinced that this was its actual appearance. Much of the rock used would have been basaltic or limestone-like in quality. Both are subject to oxidation, and turn brownish-grey over time. That would be particularly true for pavements that were exposed daily to the intense rays of the sun. The painting below reinforced my decision not to go with a white/bleached appearance of stone structures for this project. I went more brownish/grayish.

As with the causeways that I built, I used the MDF sheets I bought from Home Depot. They were 1/4″ thick sheets of 2′ by 4′ that Jeff Smith helped me to cut into ten 1’x 1′ and ten 6″ x 6″ sections. Then I laid them out to see if my initial layout concept would work. It did. But, unlike the causeways, I had an idea that the pavements should look weathered, and have some patterns sculpted onto them – Aztec patterns.

A few months prior I had learned from a friend in Maryland (Greg Priebe) that he had a surplus Aztec Roller from Green Stuff World (see it here). I was deep into painting the figures that I had at that point – but I traded some Ral Partha Vikings to him for it – with some idea that I would use it when I got to the point of building a cityscape – somehow. (THANKS GREG!!)

I was not going to like just having the MDF just be painted, I wanted a more tactile, almost 3D effect on them.

However, we are talking about 15 square feet of surface! I considered using green stuff and Apoxie Sculpt (both too expensive and potentially difficult for a huge build like this). I considered using modeling clay and then baking it and passed as that would end up potentially with either MDF on fire or a cause for my wife to terminate my existence for using her stove or both. After perusing YouTube for some ideas on sculpting on the MDF, I found this video from a guy named Luke in the UK where he used DAS clay mixed with PVA glue to use with Green Stuff Rollers. I decided that I would give that approach a go. I bought this DAS in white at Michaels.

Before I started, I needed to test and practice with the roller itself. It has a rectangular pattern, but it is a roller. Therefore, I would need to know where to start and where to stop. The solution came in borrowing some of my granddaughter Tabitha’s Play-Doh and marking a start and stop point on the roller with a Sharpie (and then returning the Play-Doh of course). This also let me figure out how large the imprint would be.

The next step was to figure out the marking/sculpting plan for each pavement. I decided that having 3″ x 3″ squares would work well with both the larger and smaller MDF tiles. I needed to have a properly-sized template for the Aztec roller such that I could center it on the sculpted tiles. I planned to do 6 large tiles with the roller imprint, 4 without, and 9 small tiles without the roller imprint, and one with it. The roller imprint would be approximately 3″ x 5.5″.

It was now time to, well, get all messy and sticky with DAS and PVA. I used a smooth pastry roller (my own thank you not my wife’s), and a carpenter’s square (also mine!) to smooth out the DAS/PVA as well as to score lines in the mix at 3″ intervals. I used separate plastic tubs to mix the DAS/PVA and to clean my tools.

The roller worked fairly well, though there was a learning curve to be sure. I definitely needed to have a tub of water, a brush, and microfiber towels to clean it (and my tools) constantly. The DAS/PVA on the MDF was left to dry over 24 hours. On a few of the larger tiles, I was surprised to see some of the MDF had a bit of warp from the drying clay/glue combo. The smaller pieces had none. Lesson learned. Certainly, finding enough flat surface for all 15 square feet to dry was not easy. I ended up using multiple card tables in the cellar. Yes, the wife was annoyed again. This whole process used up three packs of DAS – that’s 3 kilograms/6.6 pounds – of the stuff.

Once they had dried, the next question was how to paint them? I decided to use up my cans of Army Painter Strong Tone and Soft Tone (the dip), as they would be otherwise gathering dust in my paint shed. They theoretically would provide a bit of protection as well. Again, I also needed 24 hours of drying after application – yet again.

Normally, I do not use spray varnishes, but these large pieces were good candidates for a spray of Krylon matte varnish. It was warm outside, so I gave them a coat. All went well – until some of the pieces – mainly one – started bubbling up like a cheese pizza. AHHHHH!

From what I could figure out, that was caused by the aerosolized solvent in the can vaporizing in the DAS and trying to release through the varnish and the dip surface. Luckily it was only on one large tile, but that tile took a rework and made this last at least a week or two longer as I tried to find the right combination to recreate a similar color. This took me into mid-July.

I then brush varnished and shaded all of the tiles. At this time I moved on to dry brushing the imprints with Citadel “Astorath Red”. I also darkened the edges with DecoArt “Raw Umber”. The tiles line up together on the lines nicely. Though some warp is visible, it is not horrible. I also went over all of the tiles and shaded them as needed so that the colors were similar and no untouched DAS/PVA was visible.

Of course, when you see the completed cityscape, you will be able to better judge how all of these came out. As they are modular, I should be able to use them in many ways. They certainly meet the Aztec criteria of symmetry. Also, these all can be part of Dave’s Season of Scenery Challenge!

At this point in the project, I noticed how the edges of the tiles were a distraction and needed some attention. I thought that seeing bare 90 degree edges and MDF sides coming out of a lake (or swamp) was a less than aesthetically correct situation for my cityscape. People would have built the city up from the lake – and that would have involved reclaiming the lake as dry ground. How? Well, I am sure that the Aztecs would have used slave labor to haul and deposit tons upon tons of rocks on the water’s edge.

My fix was to build some revetments around the cityscape’s edge plus some lily pads, and cattails – which will be the next installment in this series!

I hope that you enjoyed this part 2 and that you stay tuned for the rest – let me know your thoughts in the comments section and I appreciate your giving this a read!

For all of my previous posts on games, units, and other projects for my 16th Century Spanish Conquest supplement for Feudal Patrol™ – “Civilizations Collide” – please see this page.