I have been trying to amass and put together more desert terrain and terrain markers for running What a Tanker© games set in North Africa in WWII.  A few months back I received a defective Panzer IVD model from Battlefront Miniatures –  in that it came with two left tracks.  Battlefront did a nice job in rectifying that situation and sent me a brand new model.  I finished that as a DAK Panzer IVD and wrote about it here.  But, I still had most of a Panzer IVD model that I could use for something.  I decided to make it into a wreck  – that would also be a nice addition as a terrain feature.  As I will be running a WaT game at HAVOC in April, so I decided to knock out four more smoke/blast markers to support that as well.  Both of these projects will be covered in this post.

These projects are my February submissions for Azazel’s February Community Painting Challenge, which he supplemented to include terrain.  This week I also started a new job!  So, I wanted to wrap up these projects this weekend.

I decided to base the wreck on an old CD that was surfaced with play sand and Elmer’s (PVA) glue.  To cover the hole, I affixed some leftover polystyrene bits.  Then, I used sandpaper to lightly scratch the CD, then applied the glue, then the sand, and let it harden overnight.  I removed the front and rear sprockets from one of the tracks and cut away some road wheels, so as to be able to flip them on the CD and make them available for the right side of the wreck in the correct locations as debris.  I carefully cut away the road wheels and part of the track and some fender, and washed everything to prep for painting.

All the pieces I would use 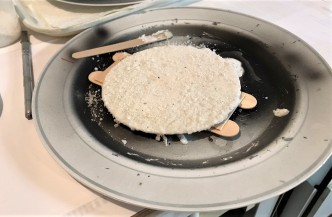 Sand and PVA glue on the CD hardening 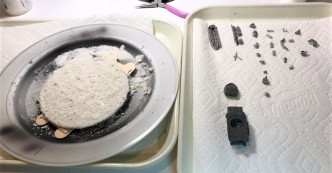 After all the pieces had dried, I then I assembled the model to look “messed up”.  I put the gun and mantlet on slightly crooked.  The turret and bustle rack were put on a bit akimbo as well.

I took a 1/8″ drill bit and drilled a hole into the hull between the missing road wheels to simulate the impact of a hard shot into the weaker flank of the tank.  In my portrayal, that shot hit ammunition, causing an explosion.  I scattered the resultant debris on one side of the tank to simulate that, affixing everything with E6000 epoxy.  I then mounted the CD onto a disposable plastic plate using poster tack for ease of painting.  I applied a coat of Citadel “Imperium Primer” as the E6000 was a bit rubbery and smooth – and I was worried that it would not hold paint well.  To double up on priming, I then airbrushed on another primer coat – Vallejo “Surface Primer – Black”.

My next thought was to do a bit of the original Panzer IVD paint on the wreck before I changed it into a wreck, as perhaps some of it would survive (I don’t think much eventually did, but I thought, better safe than sorry).  This consisted of the same basic pattern I followed on my previous German tanks.

My concept at this point was to portray the Panzer IVD as having been hit, having caught fire, then after being abandoned, rusting away.  The fire would have destroyed all or most of the original paint on the hull.  Any metal debris would have rusted afterwards in my opinion, so I decided that decals would be a waste here.

The sand and PVA glue texture was insufficiently granular for the base, so I used Citadel “Armageddon Dunes” to roughen up the landscape.  It also allowed me to make the doomed German tank’s last tracks in the desert at the rear of the vehicle.  I darkened them up with Citadel “Agrax Earthshade”.

Then I went into using various Vallejo weathering pigments to create soot, smoke, and dust on and around the model.  I especially like the soot!

For varnishing, I used two coats.  First, I applied a Vallejo “Satin” varnish with my airbrush.  After that had dried, I applied a light coat of Vallejo Mecha Color “Matt Varnish”.   I did not want to overly dull the tank, but I definitely did not want it too glossy.

I am reasonably happy with the final results.  Here are some eye-candy shots on my desert game mat – you be the judge!

The next project was making some more (and better) to put on the tabletop when tanks meet their demise – or for any explosions in general.   I took tea lights, and hot glued thin strips of pillow batting to them in a “closed lily” type of shape.

I then painted them black and grey, trying to make them less dark thank my previous attempts.

Thanks for looking at these – and I hope that perhaps these give you some ideas.  In any case, I hope you enjoyed seeing them and my processes.  Please share any feedback you have in the comments section!

37 thoughts on “Terrain for What a Tanker: Making a Panzer IVD Wreck and Blast Markers”