The epic struggle between the British 8th Army and the German/Italian Panzer Army Africa (which grew out of the Afrika Korps) has always interested me.  In fact, the very first war game I ever owned was a used 1964 copy of Avalon Hill’s Afrika Korps!  I got this in 1972, and still have it.

I played this game many times, and of course it uses cardboard counters to represent divisional and brigade-sized units.  Avalon Hill did publish Tobruk in 1975 as well, and I also have that (second hand), but I never played it (a common fate held by many of my AH games as finding opponents was not easy back then for a teenager).  So I have wanted a tank-on-tank game for a while. 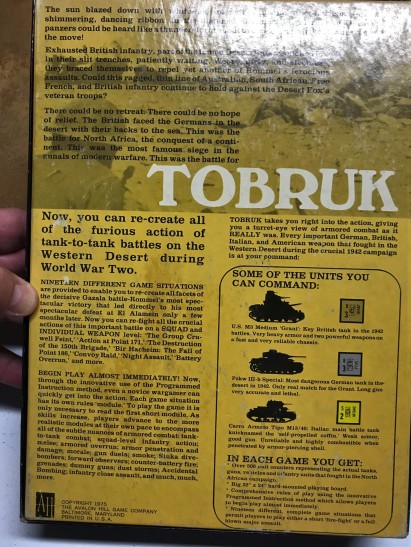 Back of the game – individual tanks! 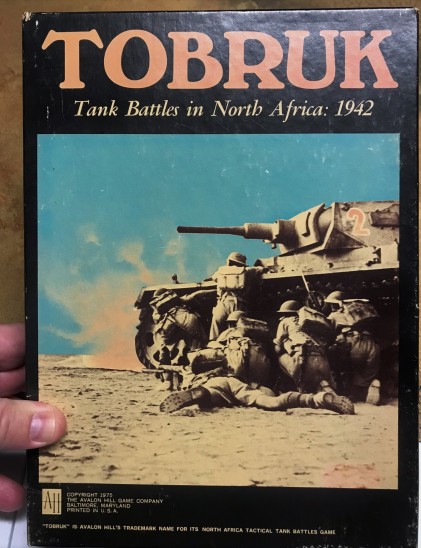 Cover of the 1975 game I am still waiting to play

My first game of What a Tanker© at BARRAGE in September was a North Africa scenario, and was just what I have longed for all of these years.  Needless to say, I was a bit hooked on the game – and some of the scenarios for which I have been collecting Flames of War tanks are for North Africa campaigns from 1940-1943.  I wanted to get a blog post in to close 2018 for the first four of these tanks.  This also counts as my submission for Azazel’s December Community painting challenge, “Dauntless-Diabolical December”.  As for the British/Commonwealth 8th Army tanks, these are two A9 Mark 1 Cruiser tanks, and two M3 Stuart “Honey’s.

To research these tanks (and other future tank projects), I bought several books from Amazon that I found very useful as background information and for modeling purposes.  To be sure, many of the images are conflicting, but my guess is that the differences represent actual historical differences in camouflage schemes.  The books I got (and you can find them on Amazon) were:

I would easily recommend all of these books as good resources, and they will be my sources for this and future tank projects.  Again, these 4 are just the start of my 8th Army tank build (never mind I still need to get to Panzer Army Africa!).

A9 Cruiser Mark I Tanks

The first pair I worked on this month were A9 Cruiser Mark I tanks.  These were involved in the Battle of France and were in the desert in North Africa in 1940-41.  The British tactical doctrine had infantry tanks (to support infantry) and cruiser tanks (to engage other tanks).  That doctrine failed to impress the Wehrmacht.  Still, the British crews fought bravely and eventually better tanks arrived from the UK and the US.  The A9’s were not great, and one of the few that if captured that were not reused by the Germans.  For a camouflage and painting scheme, I used a picture of an A10 Cruiser Mark II with a Caunter camouflage scheme (see below), and differentiated the two with some Battlefront decals.  I wanted to use units that I could identify, but in the end I went with the ones that you see. 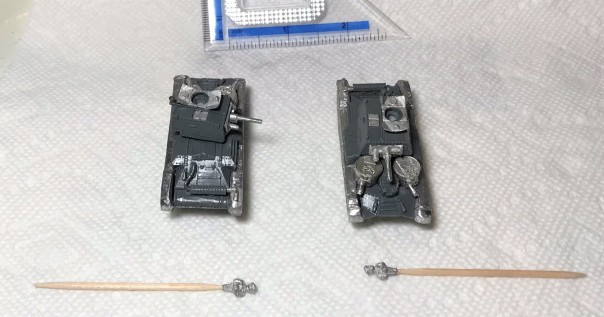 A9 Mark I Cruiser frontal view 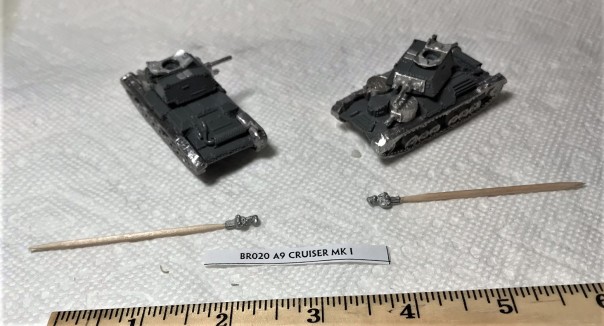 As you can see, I drilled out the crew bases and glued them to toothpicks for ease of painting.  I initially ran out of Battlefront “Crusader Sand” and used Vallejo “Desert Sand” which was too German-looking.  I found a conversion table and switched to Vallejo “Dark Sand” which was a better match.  I mounted the turrets to washers, affixed to magnets, affixed to large screws in styrofoam.  Later, I would switch to using holes in wood for better durability (the styrofoam was not sturdy enough to hold the #14 screws, magnets, washers, and turrets!). 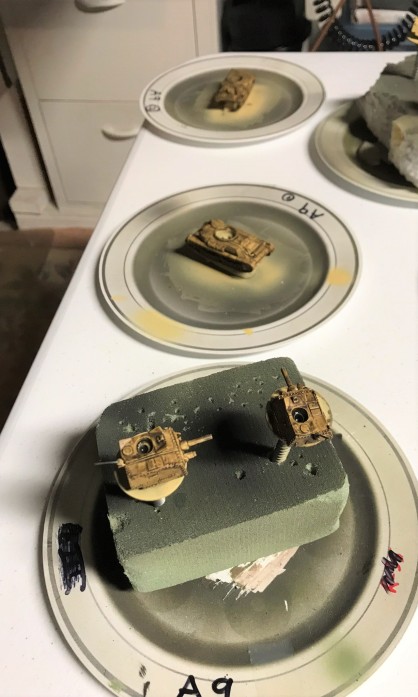 After a good wash! 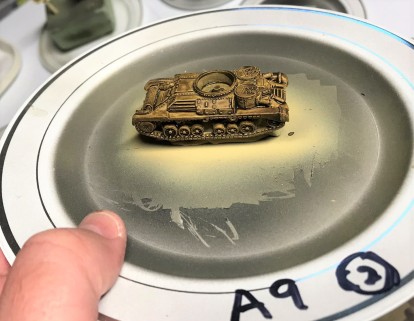 Close up of washed hull 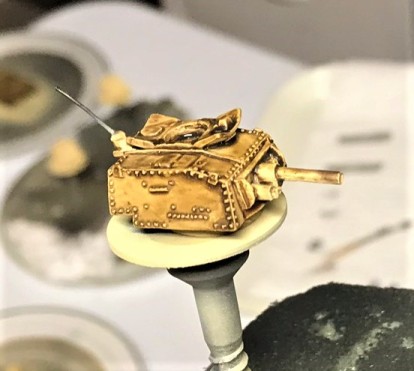 Turret close up after wash

I drilled out holes for the radio antennae and used 24 gauge wire for the aerials. 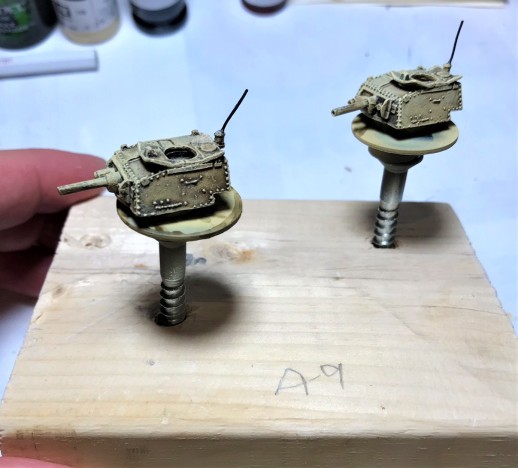 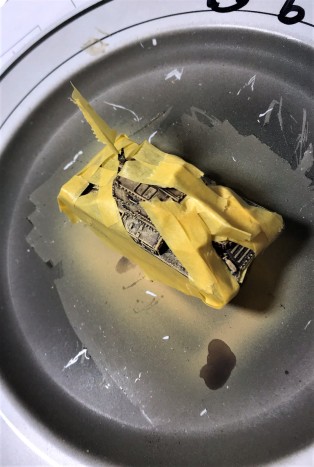 The masking I used was a combination of Tamiya tape and Vallejo “Liquid Mask”.  This was my first use of the Vallejo mask, and I will be judicious in its future use.  It does ruin the brush you use, and at this scale (15mm) its not a really useful way to create chips.  Lesson learned – I was able to wash over the patches I put the mask on and it did give the tanks more of a dirty look. 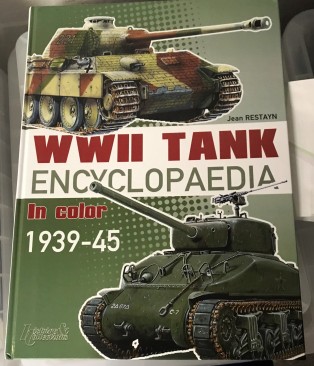 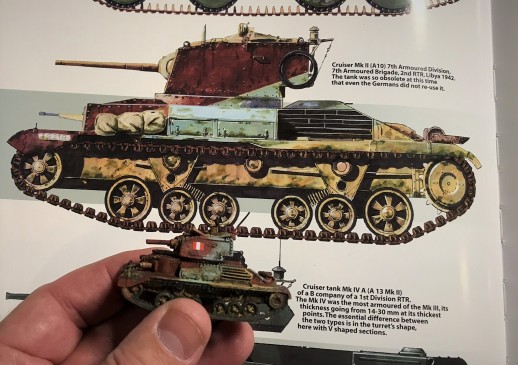 for this camouflage scheme.

Not a bad match – it was an A10 in the book, but I liked the scheme and I have other plans for my A10’s – stay tuned.  You can see more photos of the A9’s in the eye candy section below!

The M3’s came in a box of five, but I only wanted a couple for the North Africa scenarios.  The rest will be going to the Soviets (as a Lend-Lease), the Germans (captured in North Africa), and the Japanese (captured in the Philippines).  The painting scheme was mainly the same except for the grayish Caunter scheme. 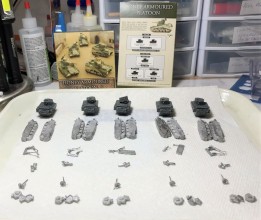 And now assembled! The crewed ones are British. 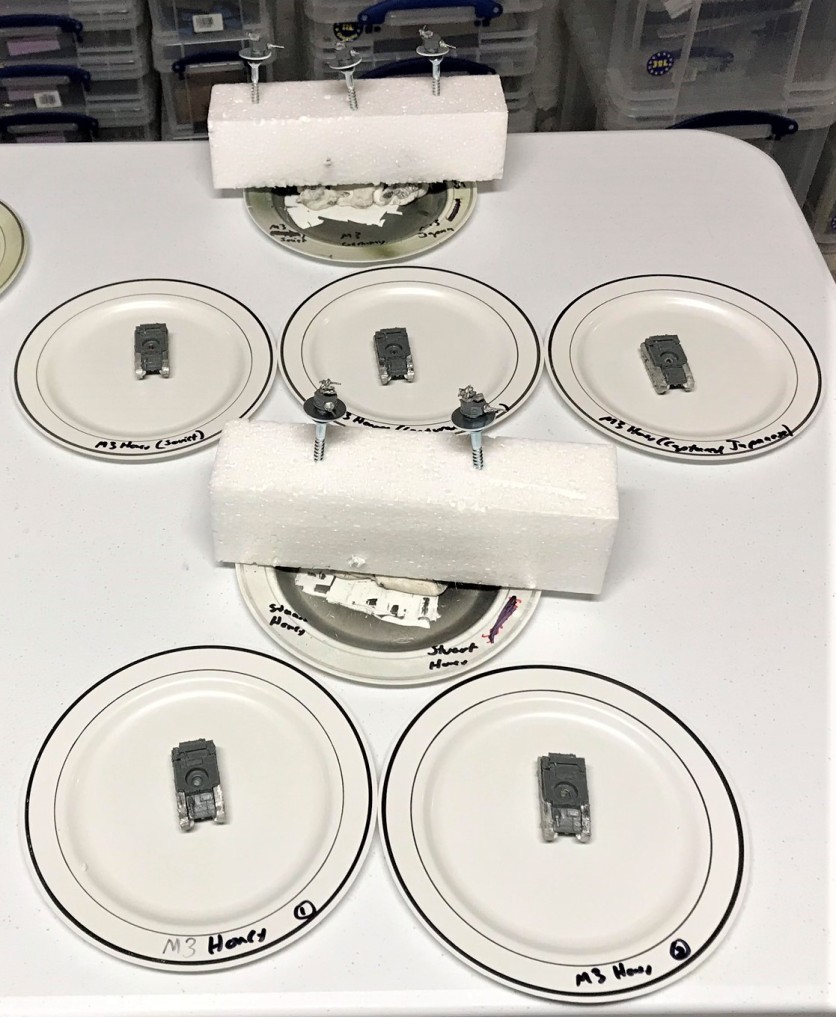 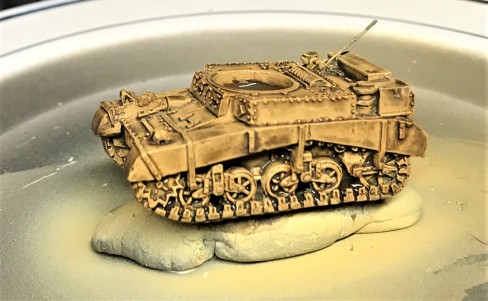 M3 after priming, base coat, and wash. 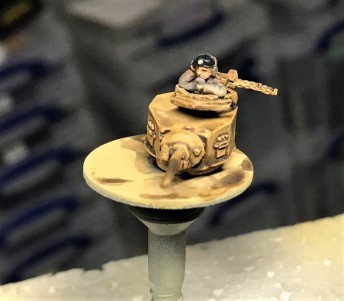 I used a different resource for the camouflage, and I like the way it came out. 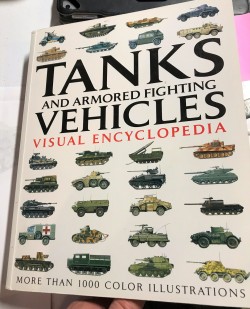 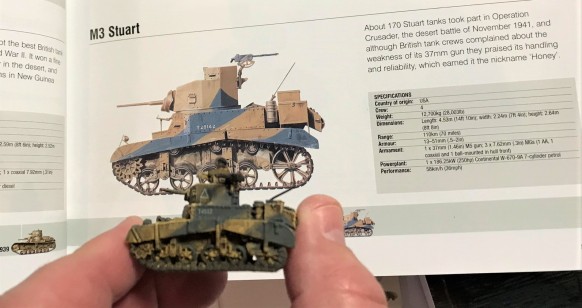 to come up with this!

So now they were all done – and it’s time for some glory pics!

These tanks all served in North Africa, but it was probably rare for A9’s to be alongside M3’s time-wise.  Still, for What a Tanker© games, these will do fine on the ladder.

As discussed, I will be adding more British cruiser and infantry tanks to my 8th Army fleet.

I am dedicating this post to all my British and Commonwealth friends!

I hope you enjoyed seeing these and reading this post.  Do you have a favorite tank?  I appreciate hearing your thoughts and feedback in the comments section below.  Thanks for looking, and Happy New Year to you all!

UNIQUE TO THE A9 MARK I CRUISER TANKS: