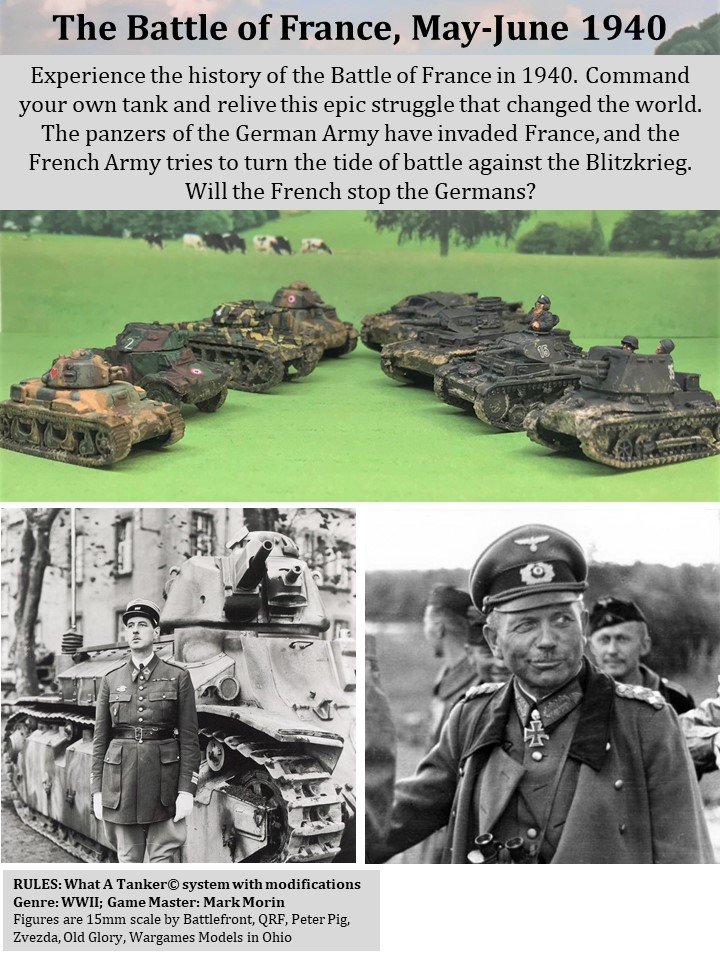 The Mass Pikemen played an action-packed game at our February gaming session.  The game was a What a Tanker© game for my Battle of France, May-June 1940 scenario.  This also served as a final play test of the scenario before using it at upcoming gaming conventions (TotalCon 34, HAVOC, and HUZZAH!).

At the start of the game, each side gets 200 points to buy tanks and armored cars as well as Bonus Attack cards if the vehicle has a radio (all the Germans have radios, many French vehicles do not).  The French are defending and have the ability to deploy at secret positions known only to their side and the GM.  The French forces are divided – with half of the battlefield being under the responsibility of cavalry tanks, and half under infantry tanks.

The Germans are exiting wooded areas on two congested roads heading to two bridges over a river.  The German mission is to cross the board and exit the other side (and head to the English Channel) – and gain points for doing so.  There are also several possible fords over the river that are minor obstacles.

The French player may also spend points to wire either one or both bridges (or none) for demolition.  This status is also known only to the French side and the GM.  The French side may attempt to blow a bridge at any time, but failing to blow the bridge or allowing any Germans to cross makes subsequent demolition attempts more difficult.  If a bridge is blown while a vehicle is on it, that vehicle is destroyed.  Any side that destroys a vehicle gets points for that action as well.  As GM, I only announce who is ahead at the beginning of the turn, and I do not share the score so as to maintain a fog of war for the players and try to maintain a crew-focused battle.

At this point the game ended, and the French had a solid victory with the score being 158-112.  The French also got bonus points for no German being able to traverse the board.  The Germans made a couple of unsuccessful Luftwaffe attacks which hindered them as well as the early casualties.The scenario is pretty solid and the gamers made key decisions that affected the game.  I did run this scenario and three other games at TotalCon 34.  I will share the results of what happened at TotalCon 34 on a future post and things went differently!.