In the spirit of bringing more miniatures back from the commercial grave, I happily share with you my latest project – a F.R.O.G. Commandos platoon.  This unit consists of 40 figures.  All of them except 1 figure were made of metal.  In the Critter Commandos universe, F.R.O.G. stands for “Federated Republics of GreenEarth”, one of several cartoon nations created by the Team Frog founder, Paul Arden Lidberg.  None of these are currently available commercially.

The unit also includes a Frogbot (Crittertek).  This project also enabled me to participate in a painting challenge “Squad March” put out by Azazel on his blog.  This contest required a unit of at least 3 figures, and I am sure that this one qualifies!  It did take up the month of March for sure.

I was able to do this because I managed to get another box of F.R.O.G. Commandos from Chris Palmer at BARRAGE in January.  Originally, each box (a re-purposed VHS tape box no less) came with 8 figures and a d10.  I had been slowly collecting many different figures from the line, but Chris’ addition of 8 frogs allowed me to create a platoon for Combat Patrol™.

I managed to successfully finish my project just in time for the end of March.  I had come across figures from the Critter Commandos line, which was initially put out sometime between the late 1980’s and early 1990’s by the Team Frog Studios company.  Later, the figures were also marketed by Nightshift Games.  The figures are all creations of the late Steve Lortz, who also made the Star Ducks and other figures for Archive.  I just love his stuff, they are a lot of fun.  Also, when I was at West Point, I was in company F-4, whose mascot was a Frog (GO FROGS RIBBIT! was our cry).  So I had another motivator here as well.

The photo below is what I had assembled for the project.  On the top you see the Frogbot, but he was definitely not together as I will discuss later.  The miniatures are around 28mm in scale. 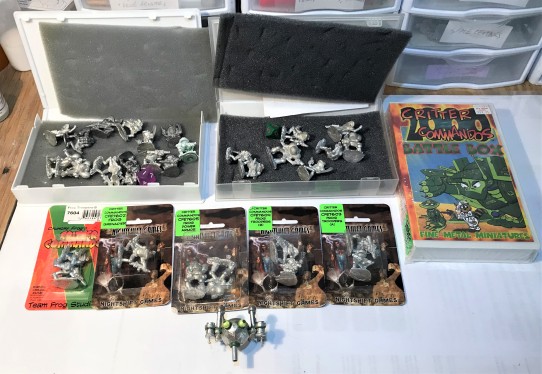 So I needed a plan – I decided that I did not want more than 1 figure per fire team to be the same figure, but as you see above, I had a hodgepodge collection.  I worked it out as follows – this unit consists of 40 figures:

It took a bit to clean and file all of these figures.  They had some casting issues (mainly cracks) that I repaired with kneadatite (green stuff).  I then moved on to the Frogbot, which was not a Lortz creation.  I had bought it on eBay with a number of other Critter Commandos, and it deserves a few notes.

The kit was incomplete.  There was no main gun, but there was a small hole in the front of the main body.  Pinning was not possible because the legs were made of some kind of tubing., and the plastic  “googly eyes” you see above would not meet my standards.  Clearly, there needed to be some changes.  First, I filed the main chassis down to remove as many casting crevices as possible.  I then got a short bolt extender, and patiently reamed out the small hole to affix the extender as a main gun for the model.

Then I needed to make it look, well, froggy.  The eyes were an issue, so I bought some cheap beads at Michael’s.  Using some dollhouse hinge screws that I drilled into the Frogbot chassis as mounts, I affixed the beads as sensors/eyes after reaming them out slightly.  Then I carefully glued the rest of the model together.

While I really was happy with the figure, the engineer in me thought that it was too structurally weak.  So I used green stuff to reinforce the legs and chain guns, as well as to fill in around the eyes and create a mantlet for the gun.

I was now ready to prime the lot.  I used my airbrush to prime the figures.  Without going into painting detail here, I will show the figures and the progression of the project.  I list the paints I used at the end of this post for those interested.

First, the lot before mounting on 1¼” washers and priming 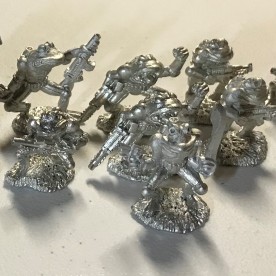 I decided to give each sub unit its own different amphibian skin color and color for accouterments, while keeping the majority of the uniforms the same.  This was to help with tabletop identification.

Once the painting was complete, I used Army Painter “Quickshade” (strong tone) to shade the models, followed by a coat of Vallejo “Matte Varnish”.  I then highlighted the models, and then added another coat of varnish with my airbrush.  I used Army Painter tufts (Jungle, Swamp, Woodland, and Meadow Flowers) to further assist in tabletop differentiation.

There were 8 different poses plus the Frogbot, so here are some front and back poses.  You can see some of the differentiating features here as well.

I am very happy with this project, and hope that you enjoyed it as well.

Thanks again  – please share your thoughts in the comments section!