The podcast is fun (and NOT just because I was lucky enough to be on it).  Here is the link where you can access the podcast on Apple – though it’s on other platforms as well:

And of course IRO has an excellent blog that is well-worth following – he’s amazingly creative.

If you listen to the podcast (and YOU SHOULD 😁), it’s clear that there are some background details of our discussion that might be of some interest to you.  Basically, it’s about how I got into the hobby back in 1982 or 1983, and how I got back into it in 2015, plus where I’m at now.  So, I will share some anecdotes, pics, and links that many of you may not have seen before.

I described how I was a traditional board game wargamer – I really got my first wargame – Avalon Hill’s Afrika Korps – probably when I was 10 or 11.  Others followed, like Waterloo, and War at Sea.  Finding opponents was not easy – most of my friends and family thought these games to be uninteresting at best.  Later, at West Point, fate got me as a roommate the irrepressible Dave Wood – who was a wargamer as well!  We spent hundreds of hours playing the aforementioned games, but also especially Victory in the Pacific and Panzer Leader.

A major influence on my hobby was to come through Dave – and that was an introduction to Buck Surdu, who was at West Point in the class behind me and Dave.  Buck had already written and had published his own sets (sets – not a set) of rules for different wargames.  My first meeting with Buck was when Dave brought me up to a session that Buck had set up in the Department of Foreign Languages classroom – it was a giant fantasy miniature battlefield covered with old 25mm Ral Partha, Grenadier, Minifig, and other miniatures.  This was set up on desks put together and covered with old US Army OD blankets as mats.  I had never seen anything like this before – and I was stunned – and hooked.  Buck had written the rules for the game as well.  Before long, both Dave and Buck were lending me figures to paint for them as I wanted to try that too.

The first units I painted for them still exist!  One was a group of Minifig halflings that Dave had that he let me paint for him.  I did not really know anything about painting with highlights, washes, or dry brushing back then.  Kindly, Dave gave them to me a few of years ago that I described here.  I flocked their bases and varnished them, but left them unchanged otherwise.

A second unit was one I painted for Buck – a group of pig-faced Orcs that I think were from Minifig.  I decided to give them a pretty gaudy paint job – with a Captain America theme.  They were the “All-American Orcs”.  Buck still has them and took a couple shots to show them to you in all their ancient “glory”:

Mind you, these were painted before my class graduation in May 1984, but I used no varnish back then so there are chips, and no flocking (washers were enough for me then) – but I’m happy to see them again, and humbled that Buck has kept them around.

Another unit (that I don’t have pictures of but Dave has somewhere) was a punk/new wave blue, red, and green mohawk-wearing group that I called “Paddy’s New Wave Bar and Grill Conscript Militia”.  Yup, that was a thing back then.

Also, I, Buck, Dave, Doug Morris (’85), and another ’84 classmate Ken Thrasher also had Sunday night campaigns of Tunnels and Trolls (a role-playing game that competed with Dungeons & Dragons back in the day).  The campaign I ran focused on a Balrog wizard who had dimensionally transported himself to the US in the 1960’s – and used LSD and other drugs – and then returned to rule a mountain lair replete with monsters, traps and puzzles with a 1960’s theme.  The Balrog’s name?  Why Purple Haze of course…

After graduation, I still puttered around with painting my own figures, as well as casting some in Prince August molds using – of all things – fishing lead weights.  I was deployed to Germany, and got to host Buck and a friend of his in 1987 for a couple of gaming weekends and a side trips to Paris via Verdun.  They were stationed in Italy.  Buck recently shared this blast from the past with me – a big game using Buck’s Fantasy Miniature rules with some edits that I made.  You cannot see a lot, but I made the game analogous to a Bastogne 1944 scenario – with sprites, dwarves, halflings, orcs and more.  We used stuff like lichen and Styrofoam as terrain. 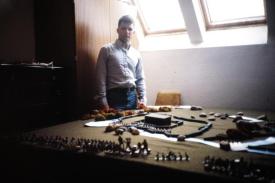 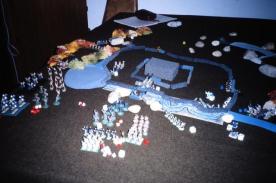 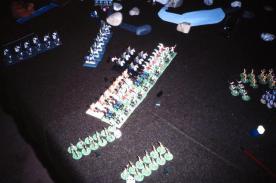 Then my hobby activities slowed to a crawl.  I was a divorced single parent, then remarried, then divorced, then remarried…in the Army, then out…in many parts of the US, then more this and that…fast forward to 2015…

I had always saved all my miniatures and paints.  I knew I would eventually get back to the hobby, but when?  Well, a chimney fire required us to move a lot in the cellar during a rebuild, and my wife was moving my minis – and I said, “I’ll take care of them”.  Next thing I know I’m painting again, gaming again, and blogging about it starting back in 2015.  My first project was “The Nightmare Legion”, which only took more than three decades to complete – and was the subject of my first blog post in March of 2015,

On the podcast, IRO discussed a few aspects of my hobbying that you may not have seen before if you are a relative newcomer to the blog.  So, here are a few links if you want to take a gander if you’d like some context:

I hope you enjoyed this romp down memory lane in conjunction with the podcast – if you have similar memories, or completely different ones – feel free to comment.

Oh yeah, if I follow or comment on your blogs, or you on mine, you all inspire me.

35 thoughts on “My Hobby Origins – and Wow – I’m on The Imperial Rebel Ork Podcast!”