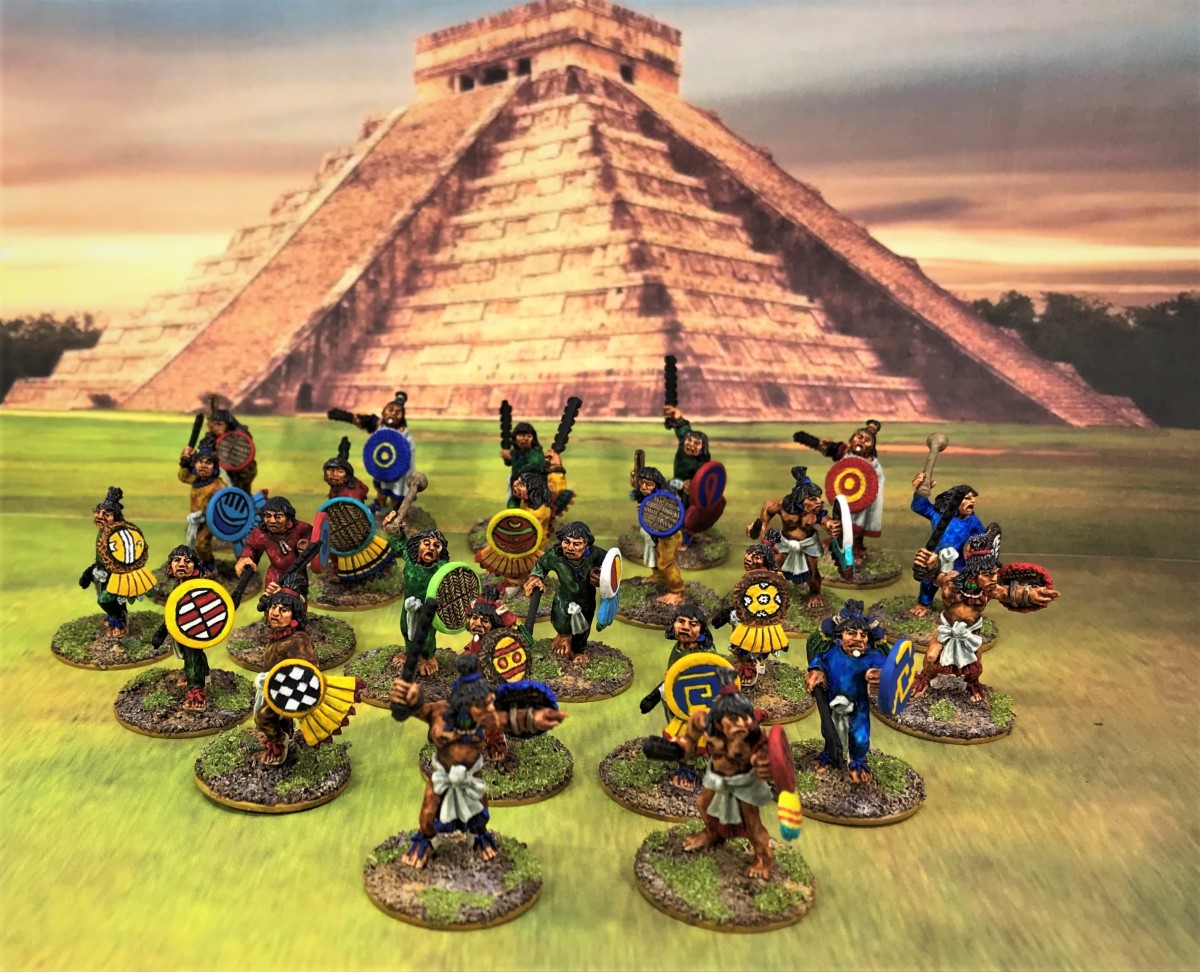 Readers of this blog have seen that I have been building a large force (Aztecs, Conquistadores, and others) for the 16th Century Spanish Conquest of Mesoamerica for the upcoming game of Buck Surdu’s Feudal Patrol™.  This game is exciting for me as I got to write the supplement for this period (“Civilizations Collide”).  I invested in a number of figures, and I have a need to push myself production-wise, without sacrificing quality.  I had two blisters each (AZ017 “Ixtlilxochitl’s Veteran Warriors” and AZ023 “Cuauhtli’s Veteran Warriors”) from Wargames Foundry.

Those Aztec names just roll off of your tongue so easily don’t they!  There were two Ixtlilxochitl’s – Ixtlilxochitl I was a Chichimec leader who fought against the Aztecs of the Triple Alliance, and Ixtlilxochitl II was his grandson who fought against Montezuma II.  So they were Aztecs – just not the ones that fought Cortes and the Conquistadores.  Cuauhtli means “Eagle”, but these so designated are not Eagle Warriors.  So, the names chosen by Wargames Foundry for the blisters sound Aztec, but are a bit off historically.  Still, the sculpts are great.

These metal figures were sculpted by Josef Ochmann and are 28mm in scale.  They are available in the US from Badger Games and from Wargames Foundry internationally.  Each of the two blister packs had 6 figures leaving me with 24 figures – with 12 of them being duplicates.  Similar to what I did with the Novice Warriors, I decided to differentiate them by both a color theme and by their shield designs.

As I had finished 24 figures previously, this project would effectively double my Aztecs – hence I am doubling down.

I also had a few technical goals here for this project.  One was to improve upon my painting of flesh tones on the models.  The second goal was to attempt to improve my shields by freehand painting historically accurate and authentic shield designs.  The last goal was to try better to use contrast medium to thin contrast paints on these figures.  As always, dear reader, you may be the judge and jury on that – and I am open to how well or how poorly you think I did here.  I find that sometimes when I am doing a platoon-sized project, I can easily overlook mistakes that would not be overlooked when doing a smaller group or even an individual figure.  Hopefully, I was able to catch any errors.

This will be a photo-heavy post.  I’ll share some WIP and some eye candy of the finished figures, along with the list of paints used here.  To do 24 figures at a time can make quite a list as you will see at the end of this blog post. 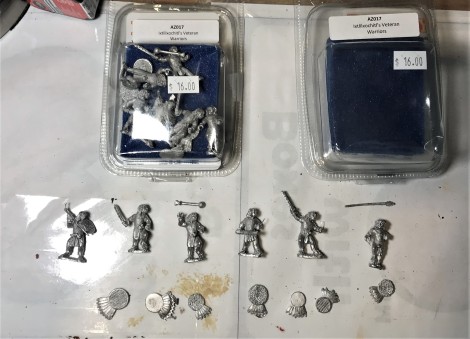 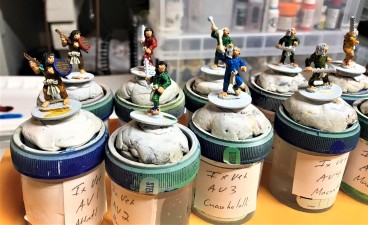 There were a few problematic mold lines – most I caught and filed/fixed but some were on the figure’s faces like below.  To eradicate some mold lines, I would have had to nuke the face, which I did not want to do.  In the end, I think I minimized most of the more egregious mold lines.

Mold line on face I missed

The shields that came with the blisters was more than sufficient.  For the 24 figures, I needed an additional 18 shields for figures that did not have one.  I also had leftover shields from the Novice Warrior project that I saved – so I ended up painting 29 shields.  It was a good chance to try some new techniques and practice with some different Aztec designs (of which there are many luckily).  The most difficult type to paint were the type that were cloth-covered types with “crenelated” surfaces (as on those the paint flows into the shields’ low areas).  I also had to be careful when painting both sides so as to protect the previous coats of paint.  Using diluted satin varnish between side swapping helped to protect the work, but I still did need to go back over the shields and touch them up.  In the end, I was happy with the results and will save the extras for future use. 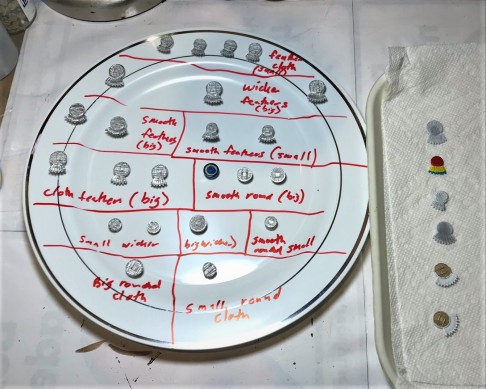 I used a plate and poster tack to prime

Then I took each type and painted them separately on smaller plates.

First, here are Ixtlilxochitl’s Veteran Warriors – there are 6 poses with two of each painted.  One was “blue-themed” and one was “red themed”, mainly to add to tabletop differentiation in addition to the shields. 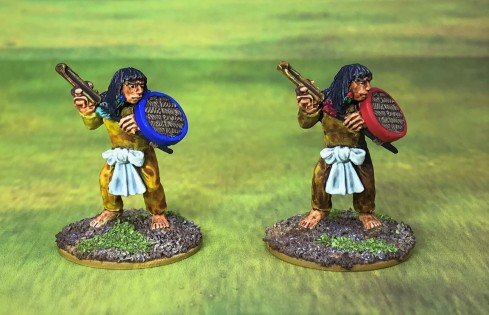 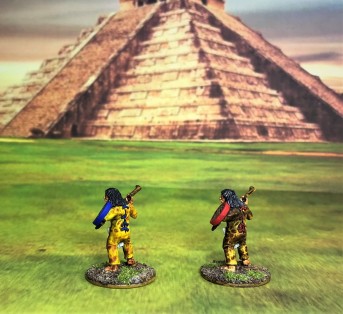 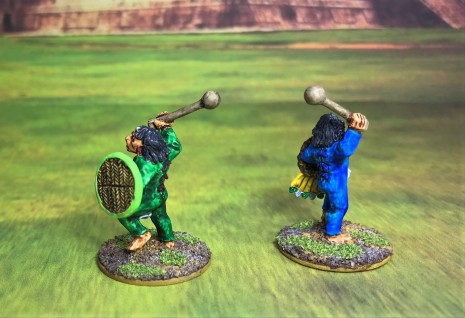 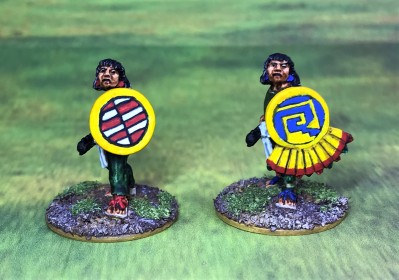 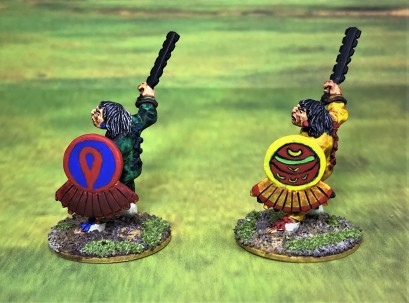 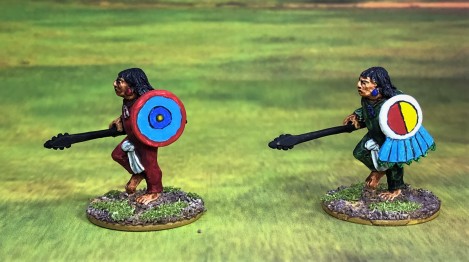 Secondly, here are Cuauhtli’s Veteran Warriors – there are also 6 poses with two of each painted.  Once again, I painted 6 as “blue-themed” and 6 as “red themed” in addition to the shields. 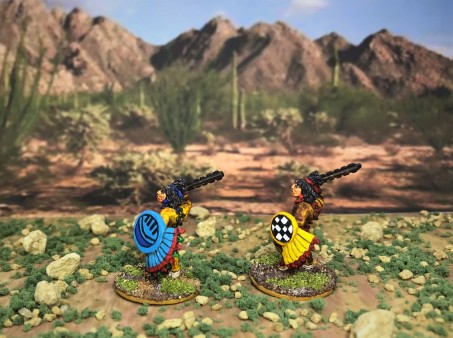 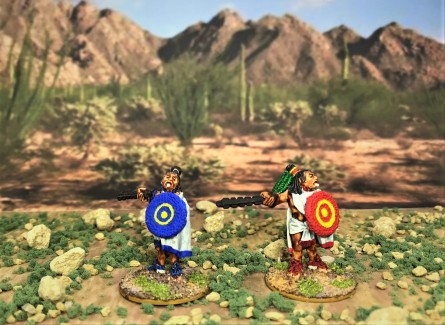 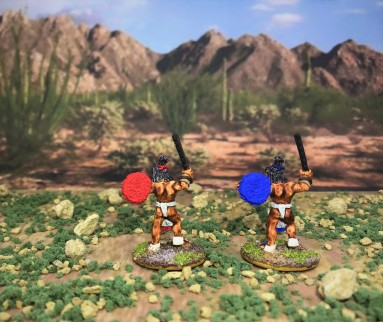 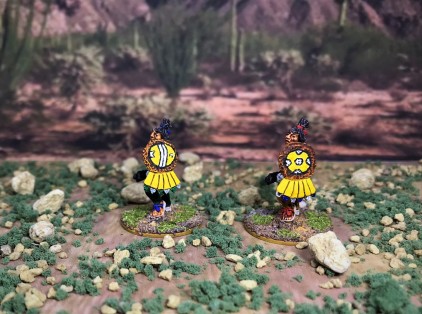 I enjoyed painting these – though I do not think that I will be doubling down with a project of 48 at a time – “a man’s gotta know his limitations” as Dirty Harry so eloquently said.

Here’s the 24 all together:

Oh yeah, I also just got a set of Feudal Patrol™ cards from Buck as a gift – try and guess which deck backings are my current favorites?

Hope that you enjoyed the post and the minis – if not, let me know – if yes, the same.

Until next time – take care and stay safe all!
Posts on Units for my 16th Century Spanish Conquest Supplement for Feudal Patrol™ – “Civilizations Collide”

Total figures to date for this project:  48 Aztecs

55 thoughts on “Doubling Down – Aztec Veteran Warriors from Wargames Foundry”