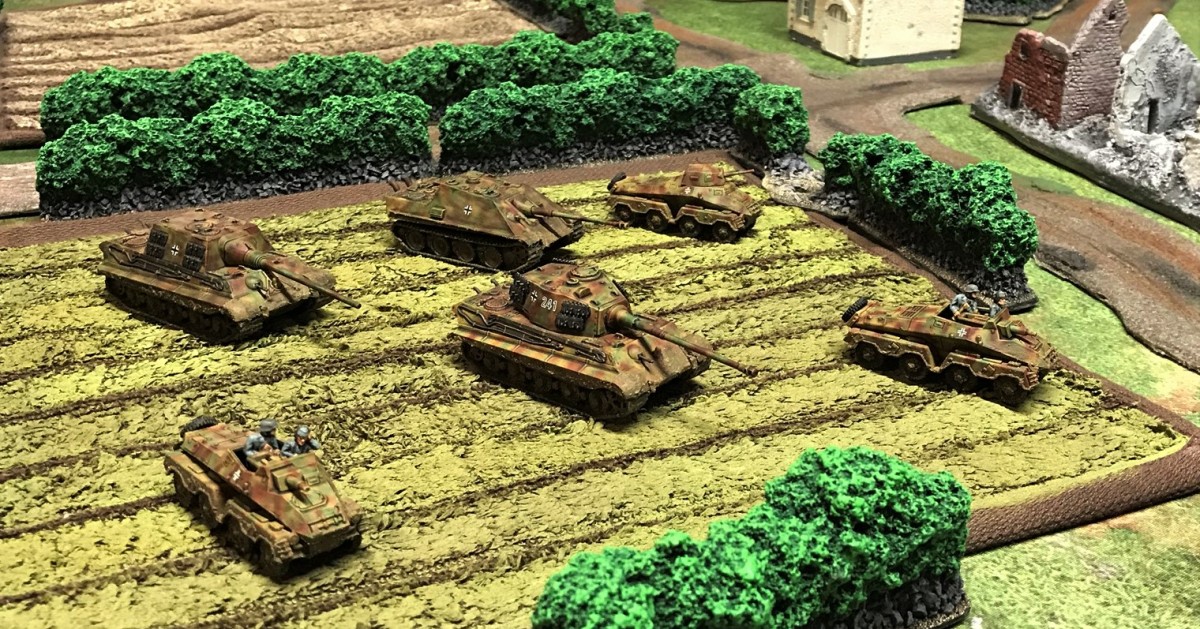 I could not create a proper WWII Normandy scenario for What a Tanker© games without the German forces having both some proper reconnaissance vehicles and some of their legendary monster behemoth tanks.  I acquired four kits to remedy this deficiency – all from The Plastic Soldier Company.  One was a PSC kit of 5 SdKfz 231 armored cars, while I also ordered three Zveda models – a Jagdpanther, a Jagdtiger, and a Tiger II (aka “King Tiger” or “Königstiger”) as shown below.   This blog installment picks up from my previous posting about German tanks and tank destroyers for Normandy.

The tanks were all single models, while the PSC kit allowed you to build either SdKfz 231, 232, 233, or 263 8-rad scout cars.  While I liked the idea of having a 232 or 263 with their iconic roof antennae, I decided not to build them as such for a couple of reasons.  First, the spindly plastic antennae did not look survivable as tabletop figures.  Secondly, if I built the antennae, the turrets would not work.  In the end, I built three SdKfz 231 (with the same 20mm autocannon as the Panzer II) and two turretless and open-topped SdKfz 233 (with the same 75mm gun as the Panzer IVD).  Two SdKfz 231’s would be for North Africa, with the remaining 231 and both 233’s being built for Normandy.  These scout cars, and the other tanks and tank destroyers here all could reasonably be used on either the Western or Eastern Fronts.  I will cover each type in order, and then some “eye candy “shots of the finished models.  I will also share a listing of the paints and other materials I used in the projects for those interested.

These are all 8-wheeled scout cars, and I plan on using them to add some recon aspects to my games.  They are very light, and as I was concerned that they would be knocked around very easily.  I added Daisy BB-gun BB’s to the 231’s, but the 233’s were open topped and that was not an option.  The 233’s did have crew that needed to be painted and mounted. 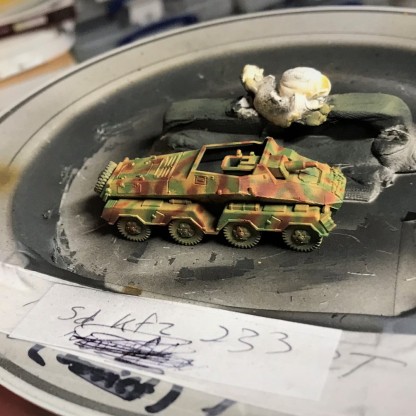 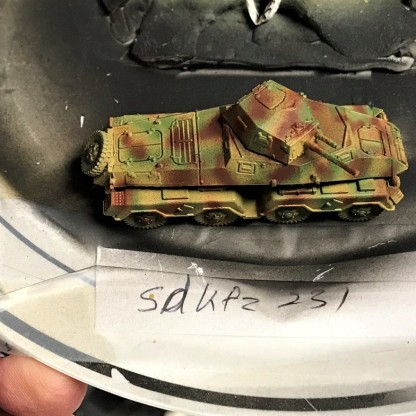 As you see above, my Iwata Micron-B was a wonderful tool to achieve the three-tone camouflage patterns.  I applied decals, weathered the vehicles, and varnished them.  The sun finally came out so I took a couple of shots on the deck.

For the North Africa/DAK 231 models, I just washed and dry-brushed them to achieve a weathered look.  I did not give the DAK 233’s because I did not want to paint another 15mm crew!  These will work just fine.

The lines on this tank destroyer are practically beautiful.  Though if I was in a Sherman seeing one, my opinion would certainly be different!  Only 415 of these were ever built.

The Jagdpanther model was the easiest to assemble of the three.  The boxes say you don’t need glue, but I recommend using modeling cement for sure.  It certainly helps to close gaps.  I also weighted the tanks and tank destroyers down with BB’s in their hulls.

This monster was quite impractical – yet one tough AFV.  It weighed nearly 72 tons, and had a number of mechanical challenges.  However, its 128 mm gun was more than enough to dispatch any other vehicle on the planet.  Between 70 and 88 were built – so they were rare.

If the Tiger was iconic, the second generation version Tiger II is a step up even higher.  Only 492 of these 68-ton behemoths were ever built, but they first saw action in Normandy.  This one has the Henschel turret (a few rarities had a Porsche turret).  Early Tiger II versions also had reliability issues, but these improved quickly.

Of course, these are all part of my planned Normandy breakout scenario – so I will now share some eye candy of these German models on that planned tabletop battlefield.

Here is the battlefield and a first play test of the scenario that I ran at the Historical Gaming Club of Uxbridge, MA.  The Americans can be seen here.

I modified the previous tabletop, and my current set up is below. 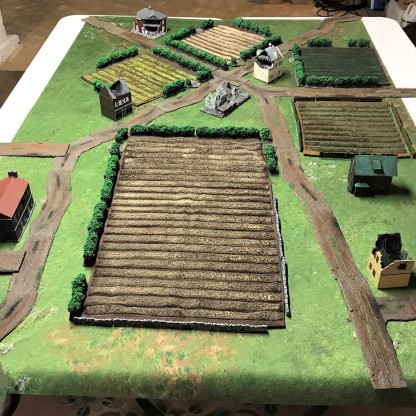 Allies move on from the left. 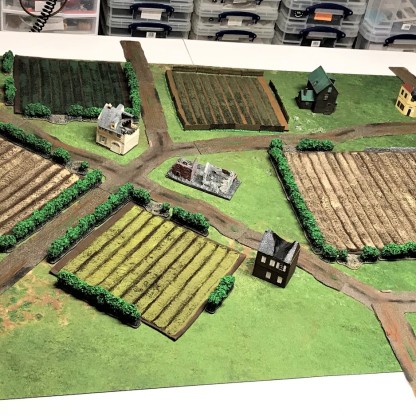 Allies move on from this side.

So now some shots of the vehicles on the new tabletop set up!

Right side of the Jagdtiger at a Normandy crossroads.

If you want to get in on the action, here’s our announcement for our next gaming session on June 29th.  Or visit our Facebook page (and join if you’d like here).

Thanks for looking!  Always appreciate your feedback in the comments section!