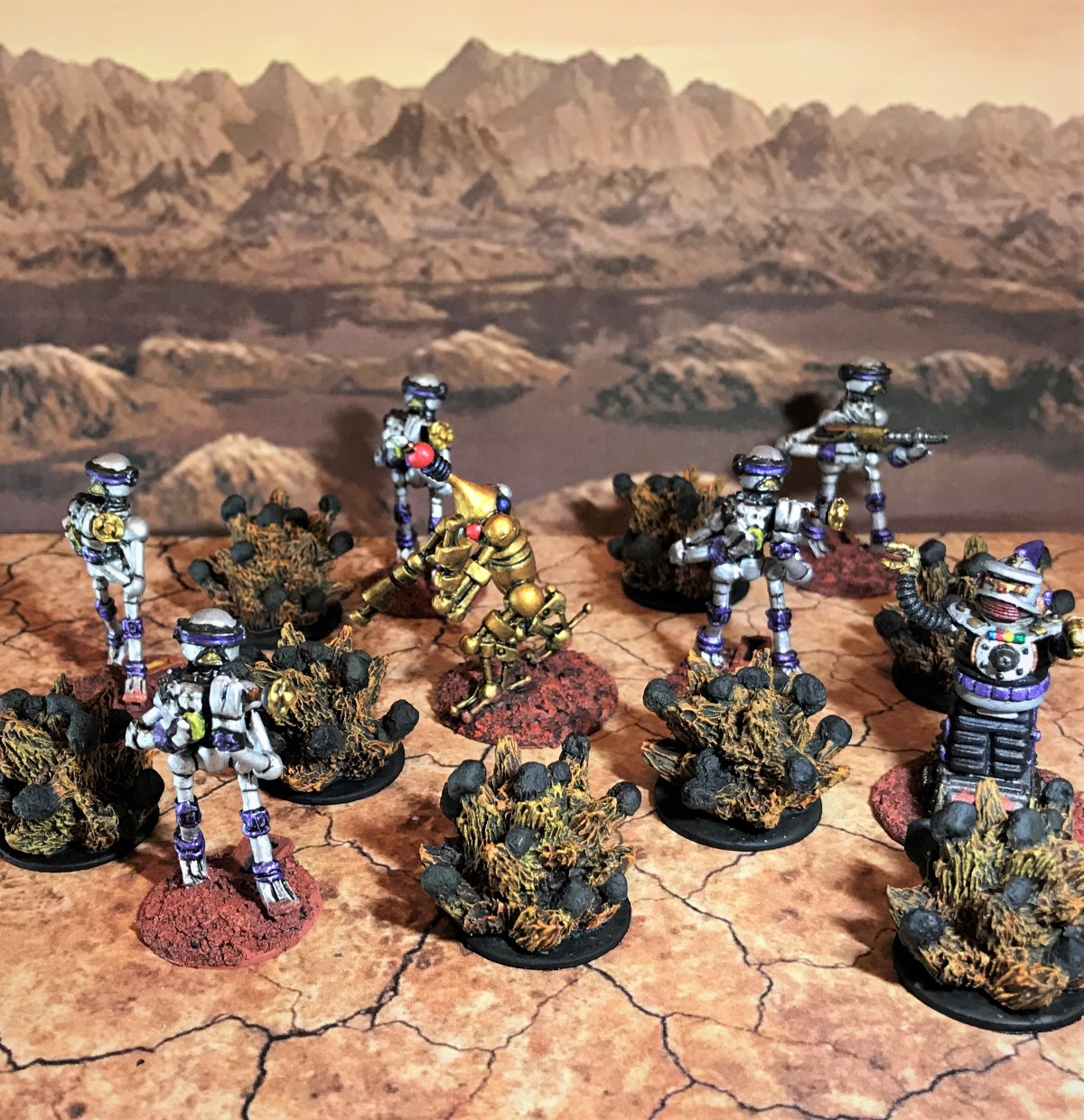 When I have wanted to demonstrate the effects of a grenade or a small explosion on a tabletop war game, I have been using cotton balls or other similar things, and this has not been a satisfactory practice for me.  I wanted to have some better effects for grenade use in Combat Patrol™ games.

I saw some nice resin ones (ACFX034 Grenade Blasts) from Armorcast in their cinematic effects line.  These were reasonably priced and looked good.  I picked up 4 packs of two from their website.

I washed them and let them dry, and then mounted them to 1″ steel washers that I had previously primed with Gorilla glue.  I left the pyramid-like under-sprues attached as I thought that this would help with painting the blasts near the bases.

This approach did help, but I wish that I had cut them prior to painting them as this would have made removal easier later.   I also tried my best to catch any areas that needed to be cleaned up in the way of excess resin.  I mounted the washers with poster tack to the tops of specimen and old aspirin bottles for painting.

Using my airbrush, I primed them with Vallejo “Gray Surface Primer”.  Once this was dry, I gave the blasts an airbrush coat of Vallejo “Game Air Black”.

After this, I switched to the brush and gave the blasts a generous application of Citadel “Nuln Oil”.  Then it was just a process of using series of dry brushings on the blasts working from bottom to top in varying degrees of color:

I then gave the entire surface a wash with Secret Weapons Washes “Sunshine Wash”.  Lastly, I painted the blast rocks/ejecta with Vallejo “Gray Black”.  At this point, I needed to remove the sprues and remount on  the washers.  I did this with a sprue cutter to minimize paint damage, but if I had done this earlier by sawing almost through the sprue I would have been better off and had less to fix!

Using gorilla glue, I reattached the blasts to the washers, and pushed the washers into the poster tack on the bottles.

I used Citadel “Imperial Primer” to cover up the unpainted parts of the metal bases, and then applied Army Painter “Quickshade” (Strong Tone) with an old brush.  I let this sit for a couple of days to harden and to dry.  I then followed up on this with an airbrush application of Army Painter “Anti-Shine” varnish (just one coat).  This suitably dulled the shine from the Quickshade.

I plan to use these blasts to both designate where grenades or small explosions occur, but and to leave on the board as temporary impediments to line of sight.  They are close enough to the Combat Patrol™ small explosion template in my view for that use (see below).

I have to say that I like these, and am looking forward to using them in a game soon!

Thanks for looking – please share your thoughts in the comments section!