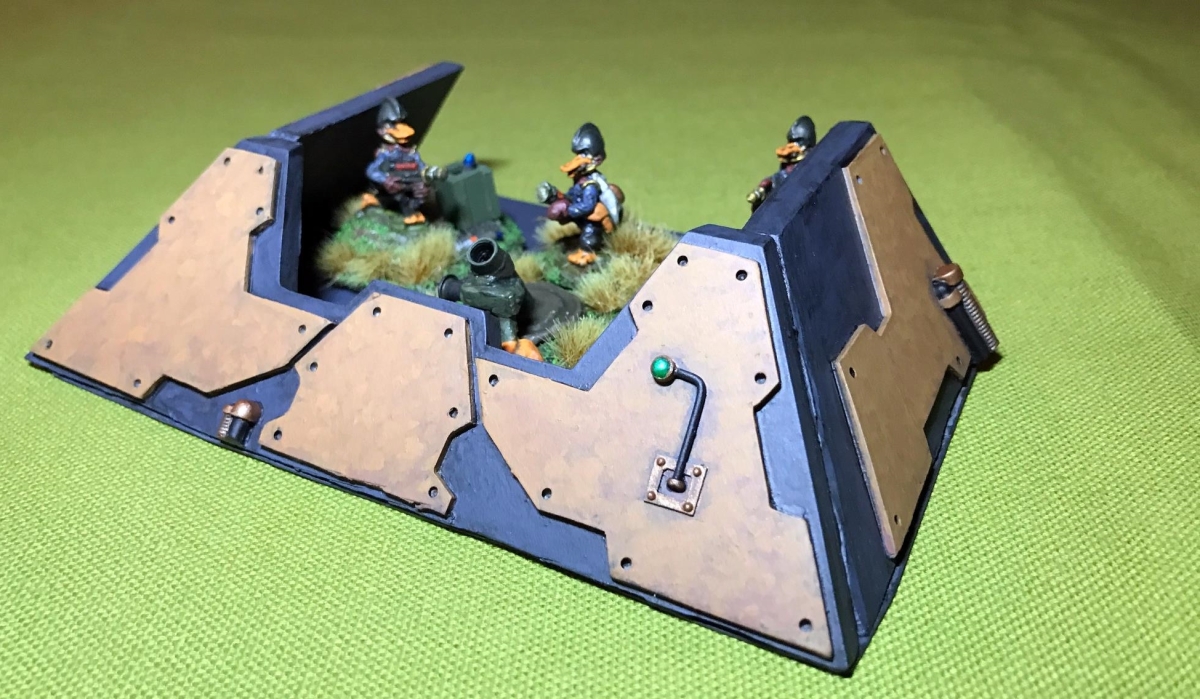 This month, in between other projects and recovery, I worked on several terrain pieces for use with my Star Rovers figures and the Combat Patrol™ gaming system.  Some I got earlier in the year from WorldWorks Games on Amazon, others I got on eBay that were from Armorcast Battlefield Scenery, others I made – and some I just don’t know who made them.  I’m hoping to use these at The Battle Standard in Auburn soon after coordinating with the owner, Jared Brodeur.

Normally I have more detail (how-to), but I lost most of the details of these terrain projects, as I had a few that I had to rework.  I think the pictures below are hopefully sufficient.  I was really happy to try new techniques with rust applications using a “pointillism” technique with a combination of Polly-S (“Rust”) and Vallejo (“Rust” 71.069 and 71.080) paints.  I mounted all of the terrain pieces on flat steel basing pieces.

The mostly Armorcast “set” I got on eBay were various refinery or industrial pieces that were airbrushed silver and gold, and that did not work for me.  I wanted the industrial ones to be more dirty and rusty.  I ended up painting some of them with various colors, and then using Army Painter Quickshade “Soft Tone” to shade.  I was not happy with most of these results, especially the Quickshade effects.  I repainted them, some with bright colors for the newer pieces of terrain, and with rust for the grittier ones, and then used spray varnish to seal.  Luckily, the Testors “Dullcoat” actually had a “crackling” chemical effect on one of the industrial tanks which worked well – (note – this was not an Armorcast piece and was likely homemade with some type of Styrofoam).  I was surprised as there was already a lot of paint and varnish on it at that point – but it was minimal and I liked it anyways.

The WorldWorks Games set consisted of a bunker, and three barricades.  They are for 28mm for sure.  The bunker was used, and difficult to assemble well with super glue.  I ended up using steel base material, popsicle sticks, wood glue, and cardboard to assist in the construction.  Here, I really liked my use of the rust pattern that I discussed earlier.

Lastly, I had three slag mounds that I mounted on two old CD’s.  The slag was a byproduct of my casting projects.  For these, I had a “Red Planet” plan, and used Citadel “Martian Ironcrust” and “Martian Ironearth” to good effect, as well as different washes. It’s a good start and I’m sure I could use some buildings and other things, but that I will get to in due time!